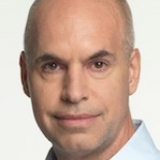 Mayor of the City of Buenos Aires

Horacio Rodríguez Larreta has been the mayor of Buenos Aires since 2015. Along with President Mauricio Macri, he co-founded the political party Compromiso para el Cambio, which was renamed Propuesta Republicana (PRO) in 2005. When Macri was elected as a national legislator in 2005, Rodríguez Larreta was the general girector of the PRO electoral campaign. Later on, in 2007 and in 2011, he held the same position and Macri was appointed mayor of the City of Buenos Aires. He also worked alongside Macri as chief of the cabinet of ministers of the City of Buenos Aires. Rodríguez Larreta was formerly a financial operations analyst at ESSO. He later worked at the Sub-secretariat of Investments at the Ministry of the Economy and as general manager of the National Social Security Administration (ANSES), and served as deputy secretary of social policy at the Secretariat of Social development. Rodríguez Larreta’s career continued at the National Institute of Social Services for Retirees (PAMI), where he was a comptroller at the Social Security Institute and the Tax Administration Department. In 1993 he founded the Fundación Grupo Sophia, an NGO composed of young people with the intention to assume public responsibilities. Rodríguez Larreta holds a BA in economics from the Universidad de Buenos Aires and an MBA from Harvard University.