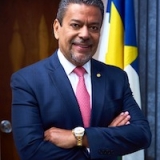 Hiran Gonçalves was born in the city of Tefé, in the state of Amazonas and graduated with a degree in medicine from the Federal University of Amazonas. He moved to Roraima in 1982, where he developed his career. For over 25 years he worked as a coroner at the Instituto Médico Legal (IML) of Roraima, while also working as an ophthalmologist, becoming a member of the American Academy of Ophthalmology. For two occasions he was president of the Regional Council of Medicine of Roraima, in addition to being regional coordinator of FUNASA and president of UniCred, and professor at the Federal University of Roraima. In his first elective term as a federal deputy, he took the leadership of his party in the Chamber of Deputies, and chaired the Social Security and Family Commission, the thematic commission responsible for voting on all issues related to health. In the current Legislature, he presides over the Mixed Parliamentary Front of Medicine and coordinates the Federal Front of Roraima. His main action topics are the defense of public health and the social and economic development of Roraima.