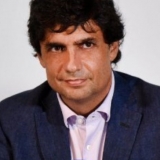 Minister of Treasury of Argentina

Hernán Lacunza has been Argentina’s minister of treasury since August 2019. Previously, he served as minister of treasury for the province of Buenos Aires under the government of María Eugenia Vidal from 2015 to 2019. In December 2013, he assumed the position of general manager of Banco Ciudad during the government of Mauricio Macri in the city of Buenos Aires. From 2010 to 2013, Lacunza served as director of Empiria Consultores. Before that, he was appointed by Martín Redrado, the president of the Central Bank of Argentina, as chief economist between 2005 and 2008 when he assumed the position of general manager until his departure in early 2010. From 2002 to 2005, Lacunza was director of the Center for International Economics at the Secretary of Commerce and International Economic Relations at the Ministry of Foreign Affairs of Argentina. Lacunza holds a degree in economics from the University of Buenos Aires (UBA) and a postgraduate degree from Di Tella University (UTDT).