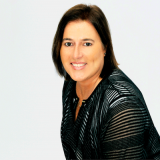 Gaby Gallardo is general manager for Latin America at Microsoft. In this role, she works with governments and partners to build a more inclusive world through digital transformation. She joined Microsoft in 2017 as general manager for Southern Latin America, a post she held until January 2020. Previously, she spent 13 years at Intel Corporation as a general manager and country manager, among other positions. From 1997 to 2004, she was an IT manager at Grupo Clarín, the largest media conglomerate in Argentina. Throughout her career, Gallardo has worked for increased digital inclusion across Latin American markets, with special attention given to small and mid-size enterprises (SMEs). Gallardo graduated from the Pontificia Universidad Católica Argentina with a Bachelor’s degree in operational research. She has an accreditation from Microsoft in Azure Fundamentals, which certifies foundational level knowledge of cloud services, including networking, storage, and security.