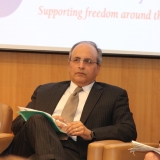 Frank Mora is the director of the Kimberly Green Latin American and Caribbean Center and a professor of politics and international relations at Florida International University (FIU). Prior to arriving at FIU, he served as deputy assistant secretary of defense for the Western Hemisphere from 2009 to 2013. He has held several teaching positions, including professor of national security strategy and Latin American Studies at the National Defense University (2004–2009), and associate professor and chair of international studies at Rhodes College (2000–2004). Mora is a recipient of the Office of the Secretary of Defense Medal for Exceptional Public Service, Department of Defense (2012). He is the author and editor of five books, including Neighborly Adversaries: U.S.-Latin American Relations (2015) and Latin American and Caribbean Foreign Policy (2003), as well as over 30 articles, book chapters, and monographs on hemispheric security, U.S.-Latin American relations, civil-military relations, and Latin American political economy and integration. Mora holds a Ph.D in international affairs from the University of Miami and a B.A. from George Washington University.