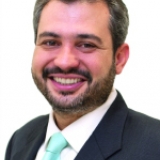 Francisco Ríos is the center director for Latin America at the Mexico office of International Enterprise (IE) Singapore. Prior to this appointment in Mexico, he was based in São Paulo Brazil, leading IE Singapore’s efforts in South American countries. Prior to that, Ríos was based in Singapore as manager of Infocomm and Media Division in the Technology Business Group at International Enterprise (IE) Singapore with the task to support Singapore’s infocomm and media companies, agencies, associations and federations in their expansion plans abroad. His main areas of focus are e-government, intelligent systems and initiatives withi nternational organizations, such as the World Bank. Ríos joined IE Singapore in 2007, initially based out of the Brazil office, as a senior marketing officer for Latin America. His early responsibilities included international business development and business facilitation for a spread of Singapore industries including transport and logistics, infocomm technologies, agribusiness and trade in general throughout the entire South American territory. Prior to joining IE, Ríos was the operations and systems manager for an agribusiness firm in Brazil, financial analyst at the business planning division for AOL Latin America in Florida, and associate engineer for the dimensional engineering department at General Motors Corporation in Detroit. He has an MBA in corporate management from Fundação Getulio Vargas in Rio de Janeiro, Brazil, and a bachelor’s in mechanical and aerospace engineering from Cornell University.