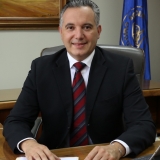 Ambassador of Costa Rica to the United States

Ambassador Llorca has long dedicated himself to serving Costa Rica through various capacities and has over 12-years of experience in international development throughout Europe. Previously, Llorca held prominent positions in major transnational organizations as a health policy advisor, a medical and research manager, and a primary care medical practitioner in Spain and in Costa Rica. Moreover, Llorca also worked as a registered medical disability analyst in the United Kingdom.

In 2014, he was appointed by ex-President Luis Guillermo Solís Rivera as the Deputy-Minister of Health, shortly thereafter becoming the Minister and the Steward of the Health, Nutrition and Sports Sector in Costa Rica where he established private and public safety regulations and best practices policies.

Amidst the crisis of the largest public pension system in Costa Rica, he was asked to take on the role of Executive President of the Costa Rican Social Security Fund (CCSS)-- the most important healthcare provider in the region that manages an annual budget of over 6.5 billion dollars. Given his extensive experience in developing social and health policy, financing healthcare services and insurance options, Llorca intends to apply his knowledge as he fulfils his new role as ambassador.

He holds an Advanced Studies Diploma in Political Economy from Universidad Complutense de Madrid, a Master of Science Health Policy, Planning and Finance from the London School of Economics and Political Science (LSE) and the Hygiene and Tropical Medicine (LSHTM) both from the University of London. He also holds two Masters (MA) in Health Care Management as well as Health Economics and Pharmacoeconomics from the Universitat Pompeu Fabra (UPF) in Barcelona. He was trained in Costa Rica as a medical doctor and has had full license to practice medicine in Costa Rica, Spain and the United Kingdom.