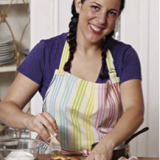 Fany Gerson is founder and chef at La Newyorkina, an artisanal Mexican frozen treats and sweets business founded in 2010. She is also chef and co-owner of Dough, an artisan gourmet doughnut shop in New York. A graduate of the Culinary Institute of America, Gerson has worked in a range of fine-dining kitchens around the world including three Michelin starred Akelare in Spain and Eleven Madison Park in New York. She has written two books, My Sweet Mexico which was nominated for a James beard award 2010 for Best Baking and Pastry Cookbook, and Paletas. Gerson is currently working on her third book tentatively entitled Helados y Nieves which focuses on the ice cream culture of Mexico and its recipes. As the country’s most authoritative voice on Mexican sweets, she has been featured in the New York Times, Gourmet, Fine Cooking, Saveur Magazine, Fine Cooking, Food and Wine and New York Magazine, among others.