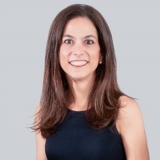 Erika Herrero became the chief executive officer of Belcorp in February 2018.  She began her career at Procter & Gamble, where she held a variety of marketing leadership positions in Latin America until April 2010 when she joined Belcorp as general manager in Colombia. Herrero later became a corporate vice president with overall business responsibility for Belcorp’s operation and sales in 15 countries. Originally from Venezuela, she graduated with a degree in Business Administration from the Universidad Metropolitana in Caracas.