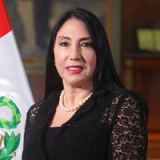 Elizabeth Astete Rodríguez is the foreign minister of Peru. She is a career diplomat with over 44 years of professional experience. At the Ministry of Foreign Affairs, Astete has served as general director in the general directorate of America; general director of economic affairs; undersecretary of economic affairs and international economic negotiations; director of economic organizations; head of the general communication office; head of coordination of the directorate of political and diplomatic affairs, undersecretariat for foreign policy; head of the financial and monetary policy department of the directorate of economic affairs, among others. Abroad she has served as ambassador of Peru to Ecuador, Mexico, Switzerland and Liechtenstein, as permanent representative of Peru to the international organizations in Geneva, as well as concurrent representative of Peru to the UN Environment Programme for Latin America and the Caribbean (UNEP), and to the UN Centre for Human Settlements (HABITAT). Astete has also served in the permanent representation of Peru to the Organization of American States and in the permanent mission of Peru to the United Nations in New York. She holds a degree in international relations from the Diplomatic Academy of Peru.