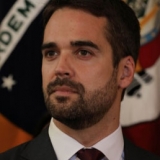 Eduardo Leite is the governor of Brazil's state of Rio Grande do Sul. He was elected with 3.128.317 votes, equivalent to 53.62 percent of the valid votes in the 2018 elections. Born in Pelotas on March 10, 1985, his term of office ends in 2022. He reached the position of governor when he was 33 years old, becoming the youngest governor in Brazil. Leite began his career path in politics early. He was mayor of Pelotas, a city in the South of Rio Grande do Sul, from 2013 to 2016, after being elected with approximately 110,000 votes. Prior to that, he served as secretary of the City Hall, alderman and president of the City Council, also in Pelotas. During his term as mayor of his hometown Leite modernized management methods and prioritized fiscal austerity, which resulted in balanced public accounts. He was able to guarantee funding for major infrastructure works and the remodeling of the urban mobility system, and he also improved health and education indicators. He completed his term with 87 percent of approval in public opinion surveys. Since he believes re-election is a problem in the current Brazilian political system, he did not run for a new term. Instead, Leite nominated his vice-mayor, Paula Mascarenhas, as a candidate, and she won the election with approximately 112,000 votes. Eduardo Leite was chosen by Americas Quarterly, an American magazine, as one of the five most promising politicians under 40 in Latin America. He went to Columbia University, in New York City, USA, where he studied Public Policy, and is currently taking a master’s degree in Public Management at Fundação Getulio Vargas, in São Paulo.