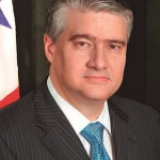 Dulcidio De La Guardia is the economy and finance minister of Panama. Prior to this position, he was chief operating officer at Morgan & Morgan Group in Panama until May 2014. On July 1, 2009, he was appointed vice minister of finance of Panama. Previously, in March 2008, he joined MMG Bank as director of wealth management. In September 2007, he was promoted head of private banking reporting to the head of private banking Latin America in Switzerland. In 2006, with the merger between HSBC Banks (Panama) and Banistmo, he was designated head of Corporate Investment Banking and Markets. In 2005, he was promoted to executive vice president, responsible for the regional investment banking unit, with operations in Panama, Costa Rica, El Salvador, Colombia, Honduras, Nicaragua, and the Bahamas. In July 2002, he joined Primer Banco del Istmo (Banistmo) as vice president of investment banking, responsible for corporate finance, mergers and acquisitions, trust services, and brokerage operations. In 1999, De La Guardia joined Banco Continental de Panama as vice president of private banking and investments, responsible for the private banking, trust, brokerage, and offshore banking services. In 1990, he joined the Panama Stock Exchange as development manager. He is member of the board of directors of Helados La Italiana, and City Sigthseeing Panama. De La Guardia graduated from Florida State University with a degree in business administration, and he holds a master’s in business administration from Loyola University. He is also a charter financial analyst of the CFA Institute in Charlottesville, Virginia.