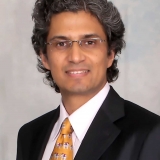 Dr. Guruduth Banavar is the vice president of Industry Solutions in IBM’s Research Division. He leads a team that applies advanced technologies to industry problems across the spectrum of IBM’s business areas. Previously, Banavar was the chief technology officer of IBM’s Public Sector business. He served as a member of IBM’s Smarter Cities initiative to improve public safety, transportation, and other city services that make cities more livable and sustainable. He also served on New York Governor Cuomo’s commission for improving New York State’s resilience to natural disasters after Hurricane Sandy. Earlier, Banavar was the director of IBM Research in India, where he helped to establish a center for Services Research and Mobile Computing, and he spent ten years at IBM’s TJ Watson Research Center in New York. Banavar holds a PhD in computer science, and his work has been featured in The New York Times, The Economist, and other international media. He received a 2009 National Innovation Award by the president of India for the Spoken Web project. Banavar is an elected member of the IBM Academy of Technology.