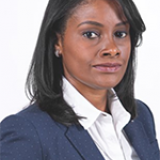 Diana Salazar is the attorney general of Ecuador, a post she has held since April 2019. Salazar has held several positions within the Ecuadoran attorney general’s office. She was the general director of the unit of financial and economic analysis in 2018, a position she held until serving as attorney general. Between 2015 and 2017, Salazar was the director of the anti-money laundering unit, an appointment she held until serving as national coordinator of the transparency and anti-corruption unit. She has also taught criminal procedure law at the University of Azuay and the University of the Americas. Salazar holds both a bachelor’s and doctorate in law and political and social sciences from the Universidad Central del Ecuador. She also holds a master’s in procedural law from the Universidad Tecnológica Indoamérica and further specialized in human rights at the Universidad Andina Simón Bolívar, as well as in economic criminal law and organized crime at the Universidad Castilla-La Mancha in Spain.