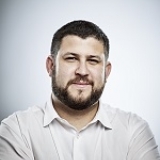 David Smolansky is the former mayor of El Hatillo municipality in Caracas, Venezuela. He is currently living in exile and is a visiting scholar at Georgetown University. Smolansky was removed from office by the Maduro administration, disqualified from any public administration role, and has a warrant out for his arrest. He was forced to flee from Venezuela after 35 days in hiding, in which he faced more than 35 checkpoints until he finally reached Brazil. Smolansky is one of the best-known young Venezuelan politicians, and was a vital member of the student movement that defeated Hugo Chávez’s constitutional reform proposal in 2007. Elected as the youngest mayor in Venezuela, his administration decreased kidnapping rates in El Hatillo, making the municipality one of the most secure and transparent in the country. Smolansky is also a founding member and deputy secretary general of Voluntad Popular, one of the main opposition political parties led by Leopoldo López. In 2015, he was recognized by Junior Chamber International as one of the Ten Outstanding Young Persons of the World. Smolansky also received the Global Impact Award from Georgetown University in 2018. A journalism graduate from the Universidad Católica Andrés Bello, he holds a master’s degree in political science from the Universidad Simón Bolívar and participated in the Global Competitiveness Leadership Program at Georgetown University.