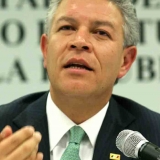 David Penchyna has been Senator for the State of Hidalgo since 2012. He is president of the Energy Commission, secretary of the Foreign Affairs with International Organizations Commission and member of the Constitutional Amendments and Finance commissions. Senator Penchyna has been elected federal congressman two times and has held several positions in the federal and State of Hidalgo governments. He is political analyst for Canal 40, and writes for newspapers including El Universal, Reforma, and Milenio Diario Hidalgo. For four consecutive years he has been recognized as one of the 300 most influential leaders in the country by Líderes Mexicanos magazine. Senator David Penchyna received his J.D. law degree from Universidad Nacional Autónoma de México and has graduate studies in public policy from Instituto Tecnológico Autónomo de México.