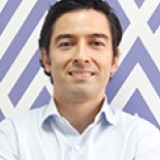 David Arana is the founder and CEO of Konfío, a fintech and SaaS platform that builds digital banking and software tools to boost SME growth and productivity throughout Latin America. Prior to this he spent over six years at Deutsche Bank, based in New York as vice president of the credit derivatives structuring division for Latin America. David received his bachelor of science degree in mathematics from Massachusetts Institute of Technology (MIT). He was recognized as a National Society of Collegiate Scholar in 2005, a Hispanic Recognition Scholar in 2003, and he won the Rensselaer Math & Science Medal and Scholarship in 2003. He speaks English, Spanish and Portuguese as a native, having lived throughout the United States, Brazil and Mexico since an early age.