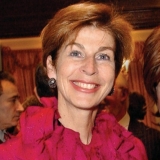 Carolina Barco is senior advisor on emerging sustainable cities to the Inter-American Development Bank. Previously, Barco served as ambassador of Colombia to the United States from 2006 to 2010, and minister of foreign affairs of Colombia from 2002 to 2006, under President Álvaro Uribe. She received her BA in sociology and economics from Wellesley College in Massachusetts and in 1975 she received a master’s degree in city planning from the Harvard University Graduate School of Design. In 1984 she received an MBA at the Instituto de Empresas in Madrid, Spain. From 1990 to 1991 she was a visiting scholar at MIT.