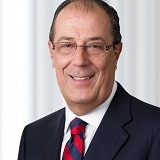 Carlos Ruiz Sacristán is the chairman and CEO of IEnova, a Sempra company. Before assuming his current responsibilities as CEO, Mr. Ruiz Sacristán was a member of Sempra Energy’s board of directors from 2007 to July 2012. During the administration of President Zedillo, he served as secretary of Communication and Transportation from 1994 to 2000. Mr. Ruiz Sacristán held a variety of positions within the Bank of Mexico from 1974 to 1988, the Ministry of Finance from 1988 to 1992, and PEMEX in 1994. He is a partner at Proyectos Estratégicos Integrales, S.C., a consulting firm specializing in infrastructure and investment banking. Mr. Ruiz Sacristán currently sits on the boards of Southern Copper Corperation, OHL Concesiones México, Banco Ve por Más, Grupo Creatica, Administradora Mexiquense del Aeropuerto Internacional de Toluca, and the Development Council of la Universidad Anáhuac. He received a Bachelor's Degree in business administration from the Anáhuac University in Mexico City and a Master's Degree in business administration from Northwestern University.