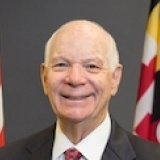 Ben Cardin has been a national leader on health care, retirement security, the environment, and fiscal issues while representing the people of Maryland in the U.S. Senate, and before that in the House of Representatives. He has worked across party lines to further U.S. national security and to ensure that good governance, transparency and respect for human rights are integrated into American foreign policy efforts. First elected to the Senate in 2006, Senator Cardin currently serves as Ranking Member of the Small Business & Entrepreneurship Committee. He is a senior member of the Senate Foreign Relations and Environment & Public Works committees. He also serves on the Senate Finance Committee. Senator Cardin is a leading advocate for the Chesapeake Bay, which is the economic, historical and cultural heart of Maryland. Nationally, he is a champion of protecting our clean air and clean water. He has introduced legislation to restore the health of America's great water bodies and is the leading proponent of investing in improvements to America's aging water infrastructure system while preparing it for the impacts of climate change. His commitment to reduce pollution and protect our environment fuels his work to broaden investments in safe public transit, as well as walking and bike trails.

A member of the Small Business and Entrepreneurship Committee since arriving in the Senate, Senator Cardin was responsible for the extension of increased guarantees and reduced fees in the Small Business Administration's two largest loan programs. He has been working to find better ways to provide access to credit for qualified small businesses and entrepreneurs, as well as expanding access to contracts for women-owned, minority owned and veteran-owned businesses. He consistently is urging federal agencies to take all steps possible to meet or exceed their modest small business contracting goals. He also has been a strong defender of the federal workforce and has fought to end the harmful effects of sequestration. Senator Cardin has a deep interest in foreign affairs and has worked across party lines to further our national security and protect universal human rights. He has fought to ensure that anti-corruption, transparency and respect for human rights are integrated our foreign policy. He also has worked to ensure gender equity in national security programs and policies. He has been a Commissioner on the U.S. Helsinki Commission since 1993, serving as Chairman of the Commission in the 111th and 113th Congress. He currently is the Ranking Senate Democrat. In 2015, he was named as the Special Representative on Anti-Semitism, Racism, and Intolerance for the 57-nation Organization Security and Cooperation in Europe (OSCE) Parliamentary Assembly. Senator Cardin serves as Ranking Member of the Foreign Relations Western Hemisphere, Transnational Crime, Civilian Security, Democracy, Human Rights, and Global Women's Issues. He previously has served as the Ranking Member of the SFRC East Asia, the Pacific, and International Cybersecurity Policy Subcommittee, and he is the former Chairman of the International Development and Foreign Assistance Subcommittee.

Senator Cardin believes access to quality, affordable health care should be a right and not a privilege. He continues to be a strong supporter of the Affordable Care Act, which brought the United States closer to this goal. He led the fight for the Patients' Bill of Rights and, because of his efforts, the law ensures that individuals in private health insurance plans have the right to choose their primary care provider, women have direct access to an ob/gyn, and patients with medical emergencies are guaranteed coverage for necessary ER visits. He was responsible for the elevation of the National Institute for Minority Health Disparities at the National Institutes of Health and has been a strong supporter of increases in funding for federally qualified health care centers and health information technology. Senator Cardin continues to be a leading champion for increased medical research funding for Maryland's world-class universities, NIH, and our State's cutting edge biotech industry. One of Senator Cardin's proudest accomplishments was leading the fight to guarantee access to dental care for children in the Children's Health Insurance Program, following the tragic loss of a 12-year-old Prince George's County boy who died after complications that followed an untreated tooth infection.

Serving as a member of the Senate Judiciary Committee during his first four years in the Senate, Senator Cardin also has developed a reputation for defending civil rights at home and has sought to find a balance between protection of civil liberties and national security. He is the lead sponsors of legislation to prohibit racial profiling by all levels of law enforcement, restore voting rights for former felons, and remove the deadline for ratification of the Equal Right Amendment. He has been a proud cosponsor of the Respect for Marriage Act and the Employment Non-Discrimination Act. From 1987–2006, Ben Cardin represented Maryland's Third Congressional District in the U.S. House of Representatives and served for 17 years on the Ways & Means Committee. He was a member of the Maryland House of Delegates from 1967–1986. During his time as Speaker from 1979–1986, he reformed Maryland's property tax system, the school financing formula and the ethical standards for elected officials. A 1967 graduate of the University of Maryland School of Law (1st in his class), he earned his B.A. degree in 1964 from the University of Pittsburgh (cum laude). He is a member of the U.S. Naval Academy Board of Visitors, the Johns Hopkins University Institute for Policy Studies' National Advisory Board and the St. Mary's College Advisory Board, Center for Study of Democracy. Senator Cardin is married to Myrna Edelman Cardin and his daughter Deborah and son-in-law Jonathan Willis have two daughters, Madeline and Julia.