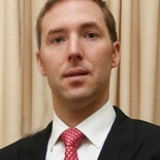 Minister of Trade and Industry of Panama

Augusto Arosemena Moreno is the minister of trade and industry of Panama. Prior to this appointment, he served as vice minister of the presidency from July 2014 to December 2015. Additionally, Arosemena serves as president of Logistic Cabinet, whose main objective is to align all government agencies’ initiatives involving the logistic sector, so they work with the common vision of turning Panama into a world-class hub. From 2009 to 2014, he was an advisor to financial institutions established in Panama in the area of structured financial transactions involving the structuring of trusts and other related contracts. Between 2004 and 2006, as commercial attaché at the Embassy of the Republic of Panama in Washington, DC, Arosemena was responsible for channeling the efforts of the embassy to attract foreign direct investment whilst working closely with government officials in the United States and Panama, as well as the private sector. He led efforts to win the backing of the business community, developed contacts and established relationships with key private sector groups in support of the Trade Promotion Agreement. Arosemena is currently leading efforts to attract cruise lines to Panama, as well as new investments in the logistics and tourism industries. He holds a degree in law and political science from Santa María La Antigua University and a LLM in banking, corporate and finance law from Fordham University in New York.