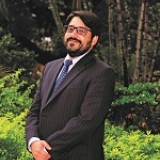 Asdrúbal Oliveros is the director of and partner at Ecoanalítica, a Caracas-based economic and financial consulting firm. He is a frequent guest on television and radio opinion programs, and appears often in press articles and specialist magazines. Currently, Oliveros is a columnist at the magazines DINERO and Business Venezuela, as well as a contributor at ProDaVinci and El Estímulo. He is also a member of the economic editorial board at the newspaper El Nacional and an external director at Bancrecer. For five years, Oliveros was a senior economist at Santander Investment in Caracas. As a member of Santander’s team of analysts for the Andean region, he won the Best Team award from the magazines LatinFinance and Institutional Investor for five consecutive years. Oliveros has also served as a professor at the Universidad Católica Andrés Bello and the Universidad Central de Venezuela. He earned a Bachelor’s degree in Economics from the Universidad Central de Venezuela and graduated from the Advanced Management Program at the Instituto de Estudios Superiores de Administración in Caracas, Venezuela. Oliveros also holds a Master’s in Public Management from the Instituto Tecnológico y de Estudios Superiores in Monterrey.