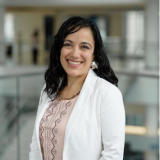 Angélica Durán-Martínez is an associate professor of political science at the University of Massachusetts-Lowell and a co-director of its global studies Ph.D. program. Her research focuses on organized crime, political, and criminal violence, and the state in Latin America. Durán-Martínez is the author of The Politics of Drug Violence: Criminals, Cops, and Politicians in Colombia and Mexico (Oxford University Press, 2018). In 2018, she won the best book prize from the International Association for the Study of Organized Crime, and in 2019 she won the Peter Katzenstein Book Prize for best first book in international relations, comparative politics, or political economy. Durán-Martínez has also published in numerous journals, including Comparative Political Studies, The Journal of Conflict Resolution, Journal of Peace Research, Latin American Politics and Society, Comparative Political Studies, and Crime, Law and Social Change. She obtained a Ph.D. in political science at Brown University, an M.A. in Latin American and Caribbean Studies from New York University, and a B.A. from the Universidad Nacional de Colombia.