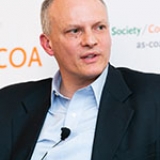 Alejandro Werner assumed his current position as director of the Western Hemisphere Department of the International Monetary Fund (IMF) in January 2013. A Mexican citizen, Werner has had distinguished careers in the public and private sectors as well as in academia. He served as undersecretary of Finance and Public Credit of Mexico (December 2006–August 2010) and head of Corporate and Investment Banking at BBVA-Bancomer (August 2011–end of 2012). Previously, he was director of Economic Studies at the Bank of Mexico and a professor at ITAM, Instituto de Empresa, and Yale University. Werner was named Young Global Leader by the World Economic Forum in 2007. He received his Ph.D. from the Massachusetts Institute of Technology in 1994.