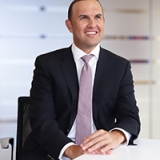 Aaron Puna is currently chief executive officer of Anglo American Chile since August 1, 2019. Prior to this he was the executive head of technical for base metals. He has over 20 years of experience in the mining industry having worked in a range of commodities in both open pit and underground mines. He joined Anglo American in Australia in 2008 and has been fulfilled general manager roles for Capcoal and Dawson as well as corporate roles focused on performance. In 2016 he was appointed to the role of head of open pit mining, group technical & sustainability, in London where his remit included technical excellence, operational excellence, and sustainability.