Masters like Soto, Cruz-Diez and Marisol had won Venezuelan art an enviable reputation for finesse, refinement and elegance. Youthful contemporaries reacted against such criteria towards a new vision that was unsettled, violent, and agressive. If these attitudes seemed in tune to global tendencies, it should be noted that the figuration and drawing which was the foundation of such expression, had a long and unbroken tradition in regional art especially in Latin America. Miguel von Dangel, Ernesto León, and Carlos Zerpa all lived in Caracas, and typified the diverse, sophisticated, and vigorous cultural heritage of the great twentieth century metropolis. Though work on the two-dimensional plane was only one aspect of their art, they were united by subject matter which was quite deliberately Venezuelan in character. 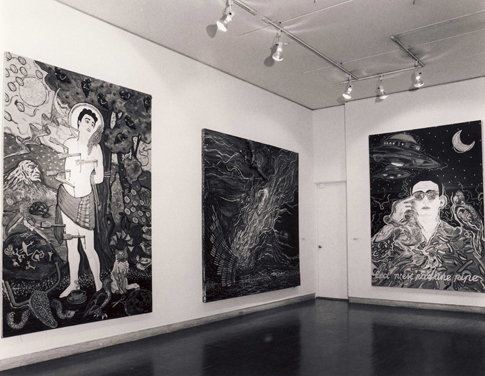 Von Dangel was intimately involed with ecology. He was an inveterate explorer into the remote reaches of the country, including the tropical jungles of the Orinoco. Indian artifacts and wildlife specimens that he collected on these forays and encounters, frequently found their way into complex assemblages. Recalling the ritual and psychological intensity of primitive art, he assaulted the viewer with violent and intuitive ferocity, using shamanic fervor to persue the truth and actuality of raw and unrefined experience. Von Dangel’s luscious color, texture, and pattern transported the viewer into the savage reality of the tropics.

León, the youngest of the trio, like Von Dangel, was involved with local identity via ecology. His panels presented flora and fauna at monumental scale. Growth patterns and idiosyncracies of various distinct identifiable plants and palms were calligraphically described with freely brushed and broadly dragged pigment. Burnished backgrounds of gold leaf were enriched with brilliant color to convey the evanescence of tropical heat and blinding light. 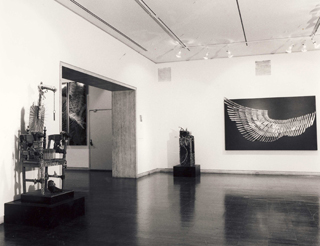 Carlos Zerpa’s interest developed beyond performance and assemblage, into painting and drawing. No longer obsessed with the evils of blind nationalism and catholic dogma, he now seeked local identity in the reinterpretation of myth. Monsters, mermaids, and New World curiosities from colonial engravings abound in his new canvases, but he also unmasked art world lengends much closer to the present date. Zerpa created a bizarre universe by surrounding Venezuelan wildlife and folklore with hybrids of Picasso, Duchamp, Matisse, and Mondrian grafted onto earlier Renaissance, Baroque, and Roccoco imagery. His brilliant rainbow palette harnessed the riotous color of the tropics. 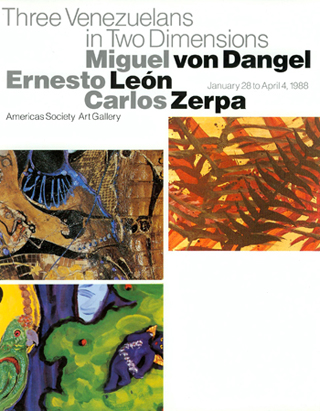 These artists were typical of the artistic plurality that flourished in Venezuela at the time. They vividly illustrated the vitality, intellectual awarness and artistic accomplishement that characterized contemporary regional art at its best.

Three Venezuelans In Two Dimensions was jointly curated by Axel Stein, Director of the Galeria Mendoza and John Stringer.

The exhibition catalogue is available.