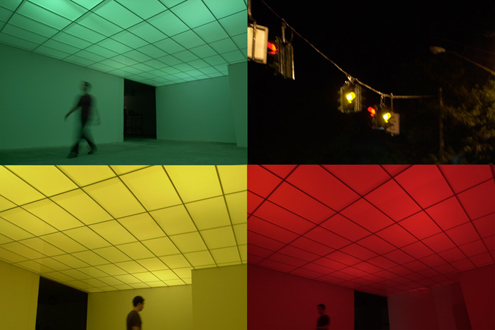 Traffic Patterns consisted of a drop ceiling containing a unique lighting system that synchronized the lighting in the gallery space to a traffic light in the city of San Juan, PR. The gallery was illuminated for some minutes with red light, followed by a brief moment in yellow, and then green. To achieve this synchronization, the lighting system used a specially designed controller/relay device connected to a computer chip programmed with the time-code of the traffic light. Although Traffic Patterns had been exhibited previously, its presentation in Puerto Rican Light was the first instance of linking the two cities together and of literally transmitting to New York City an organizing pattern located in Puerto Rico.

Initiated in 1999, Seeing Otherwise was a series of photographic seascapes taken mainly on the shoreline of Puerto Rico. They depicted an individual contemplating the sunset. Through an almost indiscernible digital manipulation of the photograph, the sunrays over the sea were deflected from the camera lens to the individual in each respective photo. The deliberate deflection of light emphasized the individual viewing the sunset. Symbolically, this accentuated what would be impossible to see otherwise: what another person would see as they experienced a sunset. For Puerto Rican Light, one photograph from this series was featured, Seeing Otherwise, Cataño.

Puerto Rican Light consisted of capturing and storing solar energy in a battery bank especially designed to provide the proper voltage to light Puerto Rican Light (to Jeanie Blake), a 1965 sculpture by artist Dan Flavin. During the month of April, the battery bank, which was connected to solar panels, was located in the gardens of the Museo de Arte Contemporáneo de Puerto Rico in San Juan. Once full of solar energy, the battery bank was shipped to Americas Society, where it was connected to Flavin’s fluorescent light sculpture. The battery bank supplied enough energy to light Flavin’s sculpture throughout the exhibition.

Chalk Monuments, a project by Allora & Calzadilla organized in conjunction with the exhibition, took place at three New York City elementary schools during May 2003. The project consisted of using pieces of chalk cast in the likeness of three New York City public art statues depicting Juan Pablo Duarte, José Martí, and George Washington for use in classroom and after-school activities.

Puerto Rican Light was made possible through the generous support of the Jacques and Natasha Gelman Trust, The Andy Warhol Foundation for the Visual Arts, and Moisés and Diana Berezdivin. Additional support was provided to the artists through the Grants Program of the Council for the Arts at MIT. Chalk Monuments was made possible through The Fund For Creative Communities, administered by The Lower Manhattan Cultural Council through the New York State Council on the Arts' Decentralization Program. Americas Society acknowledges the following individuals and organizations for their cooperation and support in the realization of this project: Lombard-Freid Fine Arts, New York; Jed Ela; Michelle Marxuach and M&M Proyectos, San Juan; Museo de Arte Contempóraneo de Puerto Rico, San Juan; Jennifer Spence; and Washington Heights-Inwood Coalition, New York.