This project represented the first time that the epic-scale illustrated manuscript the Nueva corónica i buen gobierno (New Chronicle and Good Government, ca. 1615), recently placed in the collection of the Royal Library of Copenhagen, was the subject of an exhibition. 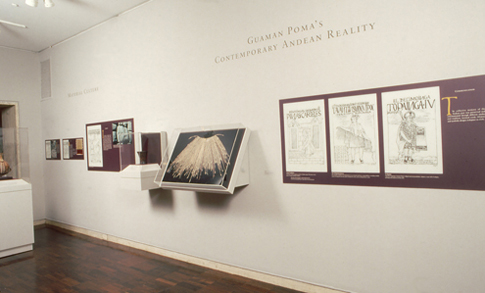 Written by a native Andean in early colonial Peru, Felipe Guamán Poma de Ayala, the Nueva corónica was a letter addressed to King Philip III of Spain to inform him about affairs in Peru and to urge better government of his colony. The Nueva corónica was a unique work of art not only because of its comprehensive scale and point of view, but also because of the way it reflected the mixing of cultures in early colonial Peru. Guamán Poma wrote in Spanish as well as in the native language Quechua, and his compelling drawings reflected the pictorial traditions of two disparate cultures, the European and the Andean. Though these illustrations were simple line drawings, they depicted an encyclopedic range of themes, including native Andean life prior to the conquest, the initial encounters between Andeans and Europeans in the 1530s, the events and battles of the conquest itself, a description of the abuses suffered by natives during the process of colonialization, and recommendation on modes of improving colonial rule.

Through reproductions of Guamán Poma’s texts and drawings, and related works of art, the public had the opportunity to comprehend the effect of the conquest of the Americas from a voice rarely heard- that of the conquered.

The exhibit, curated by Dr. Mercedes López-Baralt, included reproductions of 100 of the 380 drawings that Guamán Poma created for his 1,188 page Nueva corónica. To determine the richness and range of Guamán Poma’s artistic sources, the exhibit contained art and artifacts from native Andean, European, and Peruvian colonial cultures. Included, were Inca tunics and keros, ritual drinking cups; Medieval illustrated books; maps; and important colonial religious paintings. By merging these disparate influences in his own art, Guamán Poma perfectly embodied the rise of the mestizo culture in Peru after the conquest.