Ninety-three of the finest drawings by noted Brazilian pioneer modernist Emiliano Di Cavalcanti from the Museu de Arte Contemporanea in Sau Paulo were featured in this exhibition. Small, anecdotal, and intimiate in scale, these pieces emphasized the period of the 1920s and 1930s when the artist reached the pinnacle of his career. 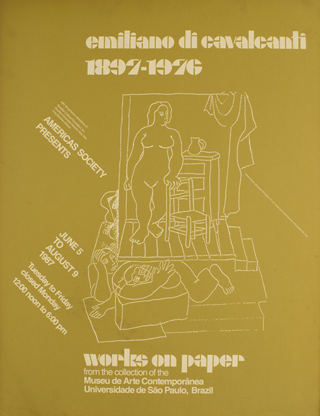 Born in Rio de Janeiro just prior to the turn of the century, Di Cavalcanti was both a painter and a draftsman who had his first exhibition of caricatures in 1916 at the Salao dos Humoristas of the Liceu de Artes e Oficios in Rio. After abandoning thoughts of a legal career, he devoted himself to art but rebelled against what he considered the sterile academicism then dominant in Brazilian painting. In 1922 he played a leading role in the organization of Modern Art Week, a series of art shows and poetry readings in the Sao Paulo Municipal Theater whose major impact on Brazilian cultural life may be equated with that of the 1913 Armory Show in the United States.

While his Mexican contemporaries Rivera, Orozco, and Siqueiros idealized the indigenous by looking back into history, Di Cavalcanti sought a specific Brazilian identity more related to modern times. Turning to the streets, bars, cafes, cabarets, nightclubs, and carnaval, he captured the distinctly local flavor of Brazilian urban life in he booming early twentieth century and recorded the diverse makeup of a youthful metropolis where socialites, the proletariat, and social deviants mingled in harmony.

This exhibition of 93 works was a distillation from a much larger show of 564 pieces presented during 1985 in Sao Paulo’s Museu de Arte Contemporanea, the bulk of which were donated as a gift to the MAC by the artist himself in 1963. To clarify the scope and character of Di Cavalcanti’s work, the curator, Aracy Amaral, grouped the drawings in seven different categories: Portraiture and Caricature, Paris, Carnaval and Night Life, Female Figures, Popular Characters and Social Themes, Landscape, and finally, Monumental Works.

This exhibition was made possible with the support of Varig Airlines, the Brazilian Consulate- General in New York, and the Brazilian Cultural Foundation, Inc.