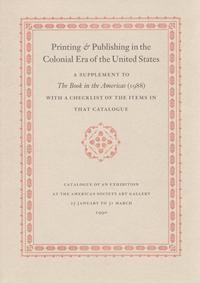 The exhibition featured a selection of rare, important books manufactured during the Colonial period in Latin America and New England. It was organized almost entirely from the permanent collection of the John Carter Brown Library, Providence, Rhode Island, with several books from the Sutro Library, a branch of the California State Library, in San Francisco. This exceptional display celebrated the 400th anniversary of the first book printed in British America, Cambridge, Massachusetts (1639) and the 450th anniversary of the beginning of printing in the New World, in Mexico (1539).

Curated by Norman Fiering, The Book in the Americas, aimed at illustrating the cultural history of the Americas, the impact of literacy, and the distribution of books on new and developing societies. As this exhibition and its accompanying publications so amply demonstrated, an examination of the history of printing also provided new perspectives for understanding the complex interrelations between publishing and many other aspects of culture, including its economics, politics, education, moral, and spiritual values.

An illustrated catalogue is available.

The book in the Americas was made possible by funding from R.R.Bowker, with additional support from the Equitable Foundation and Finch, Pruyn & Co., Inc.