Barroco de la Nueva Granada: Colonial Art from Colombia and Ecuador, a didactive and visually exciting exhibition, displayed a selection of 60 outstanding works of art, including paintings and sculptures, as well as examples of decorative arts – furniture, textiles, and objects of precious metals – produced during the mid seventeenth and eighteenth centuries in the most important Colonial artistic centers in the Vice-Royalty of New Granada (Colombia and Ecuador): Tunja, Santa Fé de Bogotá, and Popayán, in Colombia; and Quito and Cuenca, in Ecuador. Maps of colonial South America, didactic wall panels, photographs of Colonial architecture, and wall labels enhanced the interpretation of the artworks on display. 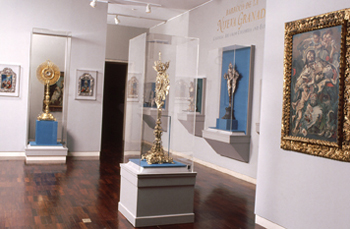 This exhibition focused on the major forms of artistic expression that flourished in colonial South America from the mid 1600s through the 1700s. While Vice-Regal art has its roots in European stylistic traditions (i.e., Renaissance and Baroque), colonial artists reinterpreted and adapted European forms, often reflecting a native sensibility toward subject matter, decorative forms, and materials. Through these processes of transformation, new artistic vocabularies and aesthetic values emerged, and remained unique to South America. The artistic experience of colonial times had a profound impact on the art of the region, to the present day. The art of Colombia and Ecuador, because of its remarkable quality, was particularly well suited to address these issues in an exhibition.

Through a carefully selected group of objects, the exhibit examined the major stylistic traits, iconography and symbols of colonial Colombian and Ecuadorian painting and sculpture. Within the decorative arts, the exhibition explored the stylistic development, technology, and function of various kinds of objects created for both secular and religious patrons. Works of art were loaned from major museums and private collections in Colombia and Ecuador.

The Colombian segment of the exhibition was curated by Marta Fajardo de Rueda, Professor of Colombian Colonial Art, at the National University of Colombia, in Bogotá, and the Ecuador segment by Dr. Alexandra Kennedy de Troya, Executive Director of the Paul Rivet Foundation in Cuenca, Ecuador. Both curators were well-known for their scholarship on Colonial art. A multinational advisory committee composed of scholars, museum professionals, conservators, and high-ranking cultural officials from Colombia, Ecuador and the United States, was formed to assist the Americas Society in the organization of this show, especially to facilitate loans of national artistic patrimony, provide access to archival information, and advise on conservation matters.

While many other aspects of Latin American art had been presented in the United States in the last decade- particularly, modern and contemporary painting- the outstanding arts of colonial South America had seldom been the subject of exhibitions, and remained largely unknown to the North American public.

The show included work by artists: