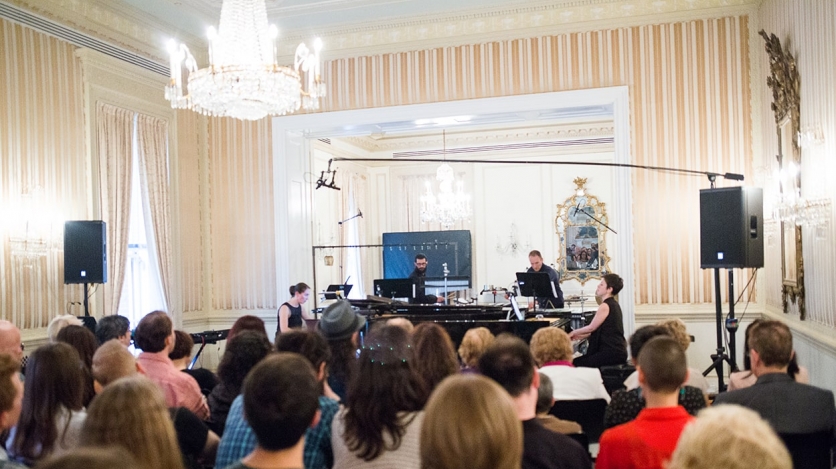 The new music quartet returns with a premiere by Taylor Brook.

In addition to being broadcast, this concert will have a live audience. Please check this page for registration information.

Founded in 2005 by four like-minded friends who were graduate students at SUNY Stony Brook, Yarn/Wire is a new music quartet dedicated to the promotion of creative, experimental new music in the United States and abroad. After exhausting the preexisting available music confined under the new music umbrella, they realized in that in order to keep playing, they would have to actively create music in partnership with composers, sound artists, noise musicians, and more around the world. After 15 years, they are still as curious and in love with music as the earlier days of the ensemble, and just as dedicated to finding depth and value in the music they believe in.

The quartet appeared on our stage in 2017 with a program of Canadian and Colombian music, and for their second performance in our series they premiere new works by Taylor Brook and DM R, whose Studies for Violin and Cello opened counter)induction's concert on our virtual stage last fall.

Brook writes music for the concert stage, electronic music, music for robotic instruments, as well as music for video, theatre, and dance. Described as “gripping” and “engrossing” by The New York Times, his compositions have been performed by ensembles and soloists such as the Ensemble Ascolta, JACK Quartet, Mivos Quartet, Nouvel Ensemble Moderne, Quatuor Bozzini, and Talea Ensemble. He has won numerous SOCAN Young Composers awards, including two first-place prizes and the grand prize in 2016 for song, for solo cello. Brook studied composition with Brian Cherney in Montreal, with Luc Brewaeys in Brussels, and with George Lewis and Georg Haas in New York. In 2008, he studied Hindustani music and performance with Debashish Bhattacharya in Kolkata. His music is often concerned with finely tuned microtonal sonorities. In 2018 Brook completed a doctor of musical arts (DMA) in music composition at Columbia University with Fred Lerdahl. He holds a master’s degree in music composition from McGill University. He is currently a core lecturer at Columbia University. He is a 2020 Guggenheim fellow and the technical director of TAK Ensemble.

The MetLife Foundation Music of the Americas concert series is made possible by the generous support of Presenting Sponsor MetLife Foundation. The Fall 2021 Music program is also supported, in part, by public funds from the New York City Department of Cultural Affairs in partnership with the City Council, and by the Howard Gilman Foundation. Additional support for this concert comes from the Alice M. Ditson Fund.