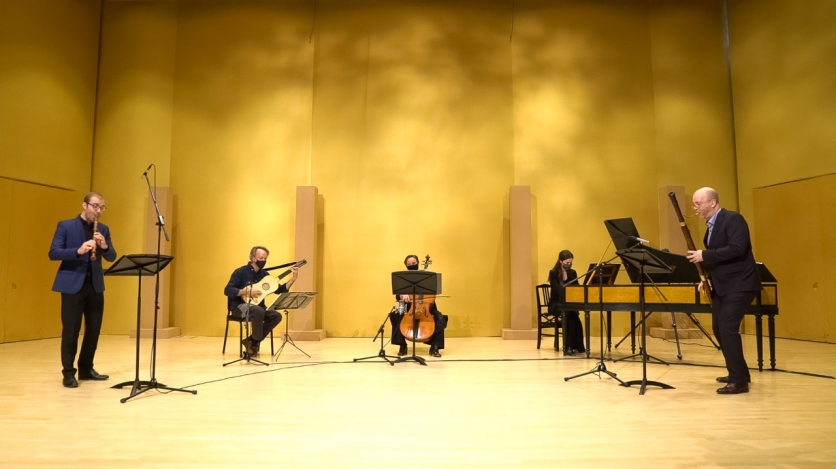 Vincent Lauzer and his group. (Image by Emmanuel Crombez via Americas Society video.)

Vincent Lauzer and his group. (Image by Emmanuel Crombez via Americas Society video.)

Révélation Radio-Canada 2013–2014 and Breakthrough Artist of the Year (2012 Opus Awards), recorder player Vincent Lauzer graduated from McGill University, where he studied with Matthias Maute. He is the artistic director of the Lamèque International Baroque Music Festival in New-Brunswick. In October 2018, his recording of Vivaldi's concertos with Arion Baroque Orchestra was awarded a Diapason d'Or by the French magazine Diapason.

Winner of several prizes in national and international competitions, he has been awarded the Fernand Lindsay Career Award, a scholarship given to a young promising Canadian musician for the development of an international career. Vincent received the Béatrice-Kennedy-Bourbeau Award at the Prix d’Europe 2015. In 2012, he won the First Prize at the Stepping Stone of the Canadian Music Competition and the Career Development Award from the Women’s Musical Club of Toronto. In 2009, he was awarded the First Prize and the Audience Appreciation Prize in the Montreal International Recorder Competition. Vincent is a member of Flûte Alors! and Les Songes, two ensembles with whom he has toured Eastern Canada with Jeunesses Musicales Canada. Vincent regularly performs as a soloist with Arion Baroque Orchestra, La Bande Montréal Baroque, the Montreal Symphony Orchestra, the Pacific Baroque Orchestra, and Les Violons du Roy. He has played in various series and festivals in Canada and in the United States as well as in Mexico, France, Germany, Spain and Belgium. Vincent teaches at the Université du Québec à Montréal, at CAMMAC music camp, for the Montreal Recorder Society, for the Toronto Early Music Players Organization and at Université de Montréal’s École des jeunes.

In his Music of the Americas debut, Lauzer is joined by a stellar group of early music specialists in a delightful concert of Trio Sonatas by Vivaldi and two of his French contemporaries. The concert was recorded in December in Quebec.

The MetLife Foundation Music of the Americas concert series is made possible by the generous support of Presenting Sponsor MetLife Foundation. The Spring 2021 Music program is also supported, in part, by public funds from the New York City Department of Cultural Affairs in partnership with the City Council.