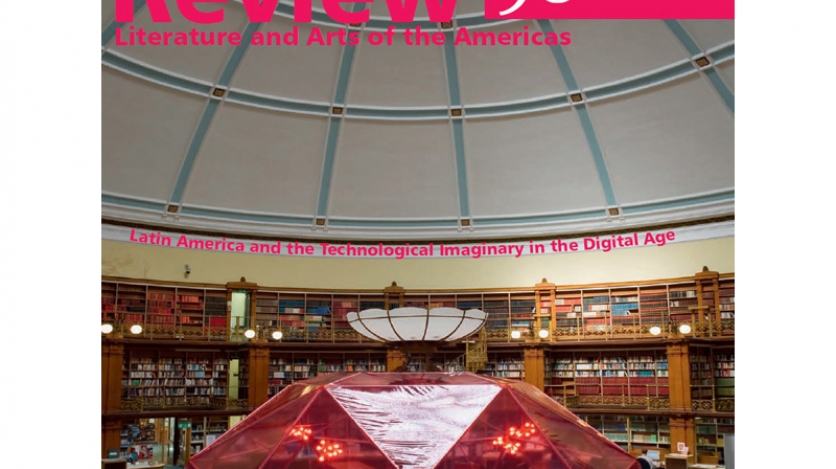 Review 90: Latin America and the Technological Imaginary in the Digital Age

The event marks the launch of the Spring 2015 issue of Review, which examines technology’s impact on literature and creative expression.

Celebrate the launch of Review 90, featuring comments by the issue’s guest editors, cultural critics Naief Yehya and Mark Dery; and readings by contributing authors: Christopher Brown, Claudia Costa Pederson, Teresa López-Pellisa (with interpretation by Charlotte Whittle), Mauricio Montiel, William Nericcio, and Pepe Rojo. In association with Routledge/Taylor & Francis, which publishes Review on behalf of the Americas Society. With the additional collaboration of the Mexican Cultural Institute of New York.

Review 90 (Spring 2016; Latin America and the Technological Imaginary in the Digital Age), guest-edited by cultural critics Mark Dery and Naief Yehya, addresses technology’s impact on creative expression, particularly in an age where collective society is experiencing unprecedented, often violent, change, when an interdisciplinary approach to the world is paramount, where boundaries are breaking down, new paradigms are emerging, and culture and technology intersect in new and previously unimagined combinations. In their respective selections of academic essays and creative texts, Dery and Yehya and their contributors consider the dissolving of boundaries and reconfigured interrelationships between discourses, considering new possibilities for creative production, where what we know as culture—writing, art, music, design—intersects with science, technology, engineering, and even politics and public policy. The contents of this issue, by a plethora of cutting-edge writers and scholars, explore the topic of the border as well as innovations in pop music, contemporary bio-art, burgeoning forms of digital writing, gender boundaries and representations, science fiction, and the often fine line between human and artificial life—all in relation to cyberculture as manifested in both the United States and Latin America (in countries such as Chile, Colombia, and Mexico). In addition to the participants in this launch, the issue includes essays, fiction, and other texts by Alberto Bisama, Bruno Bartra, Alberto Chimal, Liliana Colanzi, Rodrigo Fresán, Belén Gache, Fran Ilich, Wayne Marshall, Eden Medina, Edmundo Paz Soldán, Diego Trelles Paz, and Rafael Toriz. The Features section showcases pieces marking Adolfo Bioy Casares’s centenary and Nicanor Parra’s 100th birthday and a conversation between Colombian novelist Juan Gabriel Vásquez and American novelist Jess Row. Book reviews cover new titles in translation by Leopoldo Marechal, Sor Juana Inés de la Cruz, Valeria Luiselli, Gustavo Pérez Firmat, Andrés Neuman, Mylene Fernández-Pintado, and others.

Mark Dery is a cultural critic. He has been a professor of journalism at NYU, a Chancellor’s Distinguished Fellow at UC Irvine, and a Visiting Scholar at the American Academy in Rome. He is associated with the concept of “Afrofuturism,” a term he coined in his 1994 essay “Black to the Future”. His books include Escape Velocity: Cyberculture at the End of the Century (1997), The Pyrotechnic Insanitarium: American Culture on the Brink (1999), and I Must Not Think Bad Thoughts: Drive-by Essays on American Dread, American Dreams (2012).

Christopher Brown writes science fiction and criticism in Austin, Texas, where he also practices technology law. He co-edited, with Eduardo Jiménez Mayo, Three Messages and a Warning: Contemporary Mexican Short Stories of the Fantastic (2013). His stories and essays frequently focus on issues at the nexus of technology, politics, and economics. He has participated in several notable Mexican symposia regarding science fiction and the future of the border.

Claudia Costa Pederson is an assistant professor of Art and Technology at the School of Art, Design, and Creative Industries at Wichita State University. Her writings on play, games, digital photography, and techno-ecological art have been published in Afterimage, Intelligent Agent, and Eludamos. Forthcoming publications include a chapter in the anthology Latin American Modernism, on contemporary artists working with robotics; a chapter on contemporary feminist media in the anthology Indie Reframed; and an essay on female artists involved in the Maker movement in Latin America in the Journal of Peer Production.

Pepe Rojo has published four books and more than 200 texts: short stories, essays, and articles dealing with fiction, media, and contemporary culture. He taught in the media studies program at the Universidad Autónoma de Baja California in Tijuana for five years (2006-2011), where he published two collections of free, small-format booklets or minibúks (Mexican SF, 2009; Counter-versions, 2010), and a graphic Philosophical Dictionary of Tijuana (2011). His writing can be found in Flurb! and Three Messages and a Warning.

Charlotte Whittle is a writer and translator from Spanish. Her translations and essays have appeared in Mantis, Inti, and in the book Defining Moments in History. She is a co-translator of Eduardo González Viaña’s novel, César Vallejo’s Season in Hell, forthcoming from London’s Centre of César Vallejo Studies.

Get free online access to editor’s choices in Review 89.

Access a conversation between Juan Gabriel Vásquez and Jess Row.