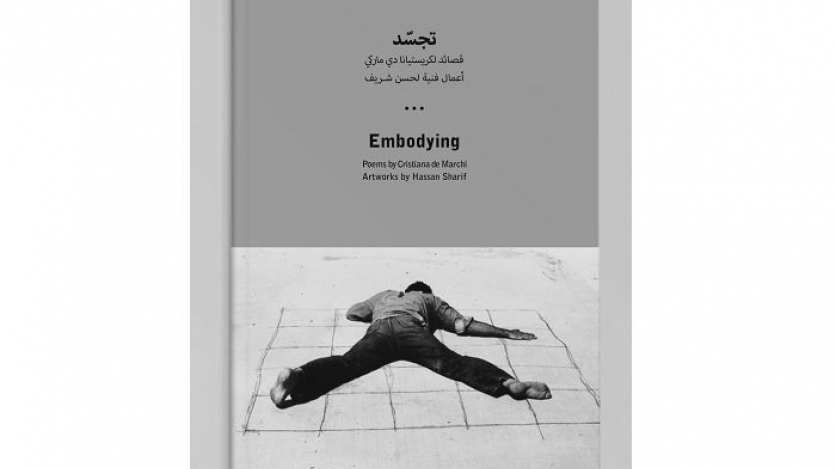 NOTE: This event has been POSTPONED. This page will be updated when a new date has been confirmed.

We apologize for any inconvenience.

Admission is open to the public and free of charge.

Hoor Al Qasimi, president and director of Sharjah Art Foundation, and Gabriela Rangel, director and chief curator of Visual Arts at Americas Society, will present the recent publication Embodying, focusing on Hassan Sharif’s engagement with experimental performance from 1982–84. With the corpus of these performances viewed only by small circles of relatives and friends in the United Arab Emirates or London, Embodying reveals them to an extended audience for the first time. The publication includes poems written by Dubai-based author and artist Cristiana de Marchi.

Hoor Al Qasimi, President and Director of Sharjah Art Foundation, is a curator and practicing artist who received her BFA from the Slade School of Fine Art, London (2002), a Diploma in Painting from the Royal Academy of Arts, London (2005) and an MA in Curating Contemporary Art from the Royal College of Art, London (2008). In 2003, she was appointed curator of Sharjah Biennial 6 and has since continued as the Biennial Director. Al Qasimi serves on the Board of Directors for MoMA PS1, New York; KW Institute for Contemporary Art, Berlin; Ashkal Alwan, Beirut and Darat Al Funun, Amman. She is President of the International Biennial Association; Chair of the Advisory Board for the College of Art and Design, University of Sharjah and member of the Advisory Board for Khoj International Artists’ Association, New Delhi. She is currently a member of the Prince Claus Award Committee (2016–current) and served as a member of the jury for the Bonnefanten Award for Contemporary Art (2018).  Al Qasimi has previously served on the juries and prize panels for the Maria Lassnig Prize (2017), Mediacity Seoul Prize (2016), Hepworth Wakefield Prize for Sculpture (2016), Berlin International Film Festival – Berlinale Shorts (2016), Videobrasil (2015), Dubai International Film Festival (2014) and Benesse Prize (2013). Recent curatorial projects include major retrospectives Hassan Sharif: I Am The Single Work Artist (2017–2018), Yayoi Kusama: Dot Obsessions (2016–2017), Robert Breer: Time Flies (2016–2017), Simone Fattal (2016) and Farideh Lashai (2016) as well as 1980–Today: Exhibitions in the United Arab Emirates, UAE Pavilion, 56th Venice Biennale (2015); Rasheed Araeen: Before and After Minimalism (2014) and Susan Hefuna: Another Place (2014). Al Qasimi was co-curator for Joana Hadjithomas and Khalil Joreige: Two Suns in a Sunset (2016), exhibited not only in Sharjah but also at Jeu de Paume, Paris; Haus der Kunst, Munich and IVAM, Valencia. She co-curated the major survey shows When Art Becomes Liberty: The Egyptian Surrealists (1938–1965) (2016) and The Khartoum School: The Making of the Modern Art Movement in Sudan (1945–Present) (2016–2017).

Gabriela Rangel (Venezuela/USA) is Visual Arts Director and Chief Curator at Americas Society. She holds an M.A. in curatorial studies from Bard College, Annandale-on-Hudson; an M.A. in media and communications studies from the Universidad Católica Andrés Bello in Caracas; and film studies from the International Film School at San Antonio de los Baños, Cuba. She worked at the Fundación Cinemateca Nacional and the Museo Alejandro Otero in Caracas, and the Museum of Fine Arts in Houston. She has curated and co-curated numerous exhibitions on modern and contemporary art that include Marta Minujín, Carlos Cruz-Diez, Gordon Matta-Clark, Arturo Herrera, Paula Trope, and Alejandro Xul Solar. She has contributed to art periodicals such as Art in America, Parkett, and Art Nexus. Rangel has edited and written for art publications that included Abraham Cruzvillegas, Empty Lot (Tate, 2015), Marta Minujín (Ciudad de Buenos Aires, 2015), Javier Téllez/Vasco Araujo: Larger than Life (Fundação Calouste Gulbenkian, 2012), Arturo Herrera (Transnocho Arte, 2009), and A Principality of its Own (Americas Society-Harvard University Press, 2006), among others.