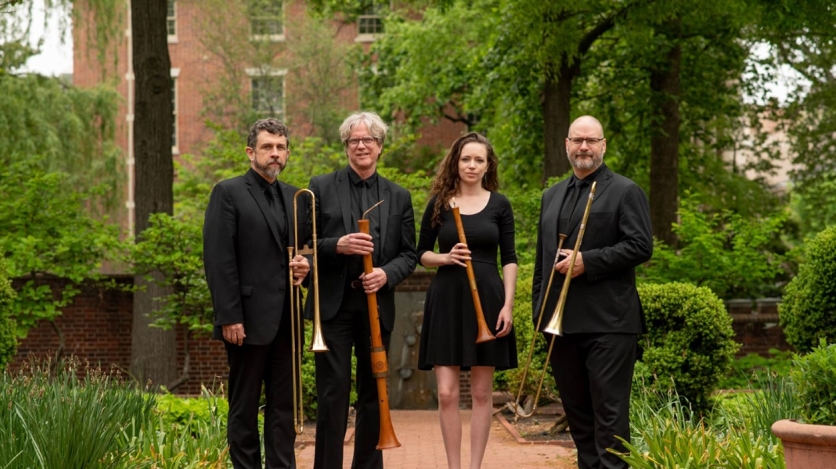 The early music group, joined by a stellar vocal ensemble, makes its Music of the Americas debut wit a program of Latin American 16th-century music.

On May 23, we will host this event in person, and tickets are free. Please email us to reserve your seat.
Video of the concert will be released at a later date. Remember to follow us to watch this and other exciting performances.

The indigenous musicians of South America quickly adopted and mastered the new instruments and forms brought by Catholic colonists in the 16th century. Incorporating shawms, dulcians, and sackbuts into their own musical culture, they became proficient performers and composers in the European polyphonic style. Over the following two centuries, this musical cross-pollination produced a body of work unsurpassed in its magnificence.

Piffaro, The Renaissance Band delights audiences with highly polished recreations of the rustic music of the peasantry and the elegant sounds of the official wind bands of the late Medieval and Renaissance periods. Its ever-expanding instrumentarium includes shawms, dulcians, sackbuts, recorders, krumhorns, bagpipes, lutes, guitars, harps, and a variety of percussion—all careful reconstructions of instruments from the period.

Under Artistic Director Priscilla Herreid, the world-renowned pied-pipers of Early Music present an annual subscription concert series in the Philadelphia region, tour throughout the United States, Europe, Canada, and South America, and appear as performers and instructors at major Early Music festivals. Recordings are a significant part of the ensemble’s work, and 18 CDs have been released since 1992. Piffaro has been active in the field of education since its inception in 1980, and has been honored twice for its work by Early Music America, receiving the “Early Music Brings History Alive” award in 2003, and the Laurette Goldberg “Lifetime Achievement Award in Early Music Outreach” in 2011. In June 2015, the American Recorder Society honored Piffaro with its Distinguished Achievement Award.