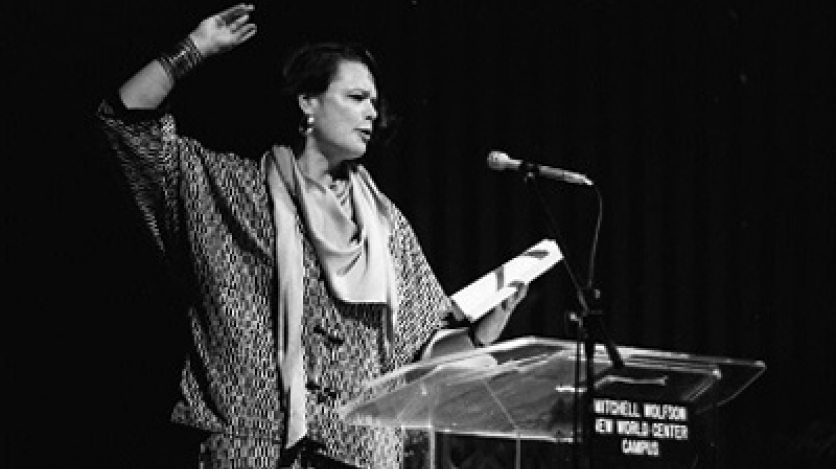 Online registration is now closed. Members may still arrive prior to the event and pick up their tickets, and non-members may pay at the door. Email jnegroni@as-coa.org for questions.

This opening event for the Americas Society's Spring 2014 Literature season will feature Peruvian poets Mariela Dreyfus and Roger Santiváñez and U.S. poet Anne Waldman—associated with the Beat writers, and who worked closely with Allen Ginsberg—who will read from their latest books. The reading will underscore the counterpoint of two poetry movements—the American Beat Generation of the 1950s and the Peruvian Kloaka movement of the 1980s—in order to understand the influence of both on their respective cultures and to create a poetic synergy for the present and beyond. Scheduled for the Spring Solstice, the program will celebrate poetic culture as an expression of non-violence and, in particular, the respective new titles by all three poets—Dreyfus's Pez/Fish (Nirala), Santiváñez's Roberts Pool Crepúsculos (Hipocampo), and Waldman's Gossamurmur (Penguin). Translators E.M. O'Connor and Elsa Costa will also participate. A book-signing will follow the reading, in collaboration with Posman Books. In English with bilingual readings.

The Beat Movement, also called the Beat Generation, is an American social and literary movement originating in the 1950s and centered in the bohemian artist communities of San Francisco's North Beach, Los Angeles' Venice West, and New York City's Greenwich Village. Its adherents, self-styled as "beat" (originally meaning "weary," but later also connoting a musical sense, a "beatific" spirituality, and other meanings) and derisively called "beatniks," expressed their alienation from conventional, or "square," society by adopting an almost uniform style of seedy dress, manners, and "hip" vocabulary borrowed from jazz musicians. Generally apolitical and indifferent to social problems, they advocated personal release, purification, and illumination through the heightened sensory awareness that might be induced by drugs, jazz, sex, or the disciplines of Zen Buddhism. Apologists for the Beats, among them Paul Goodman, found the joylessness and purposelessness of modern society sufficient justification for both withdrawal and protest.

Beat poets sought to liberate poetry from academic preciosity and bring it "back to the streets." They read their poetry, sometimes to the accompaniment of progressive jazz, in such Beat strongholds as the Coexistence Bagel Shop and Lawrence Ferlinghetti's City Lights bookstore in San Francisco. The verse was frequently chaotic and liberally sprinkled with obscenities but was sometimes, as in the case of Allen Ginsberg's Howl (1956), ruggedly powerful and moving. Ginsberg and other major figures of the movement, such as the novelist Jack Kerouac, author of the iconic novel On the Road (1957), advocated a kind of free, unstructured composition in which the writer put down his/her thoughts and feelings without plan or revision—to convey the immediacy of experience. By about 1960, when the notoriety of the movement had begun to fade, it had produced a number of interesting and promising writers, including Ferlinghetti, Gregory Corso, Philip Whalen, and Gary Snyder, and had paved the way for acceptance of other unorthodox and previously ignored writers, such as the Black Mountain poets and the novelist William Burroughs.

The Kloaka Movement was founded in Lima, Peru in 1982 by poets Mariela Dreyfus and Roger Santiváñez, who both decided to initiate a state of poetic revolt by creating a new language for Peruvian poetry and, if possible, for Latin American poetry as a whole. The two writers were heavily influenced by what Octavio Paz called "the tradition of rupture." In addition, they were shaped by Rimbaud, Surrealism, European avant-garde movements, Colombian nadaísmo, Mexican infrarealismo nadaísmo, the rebirth of Anglo-Saxon modernism, the Beat movement, hippiedom and punk rock. The Kloaka Movement also explored the roots of Andean Quechua culture.

"One of today's most important Latin American poets."
—Apiary magazine (on Roger Santiváñez)

"In Gossamurmur we see a master poet in the throes of the performance of a lifetime."
—Eileen Myles (on Anne Waldman's Gossamurmur)

Mariela Dreyfus (Lima, 1960) is the author of six volumes of poetry, including Morir es un arte (2010), Cuaderno músico (2014), and Pez (2005; Fish, 2014). She has recently translated the anthology An August Snow and Other Poems/Nieve de agosto y otros poemas (2014) by Daniel Thomas Moran. She teaches poetry and literary translation at the MFA program in Creative Writing in Spanish at New York University.

Anne Waldman was born in 1945 and grew up in Greenwich Village. World-renowned for her high-energy poetry performances, she is the author of over 40 books of poetry. She is the co-founder and director of The Jack Kerouac School of Disembodied Poetics at Naropa University in Boulder, Colorado. Her most recent publications are Gossamurmur (2013) and Jaguar Harmonics: Person Woven of Tesserae (2014). Waldman is a Guggenheim Fellow for 2013-14.