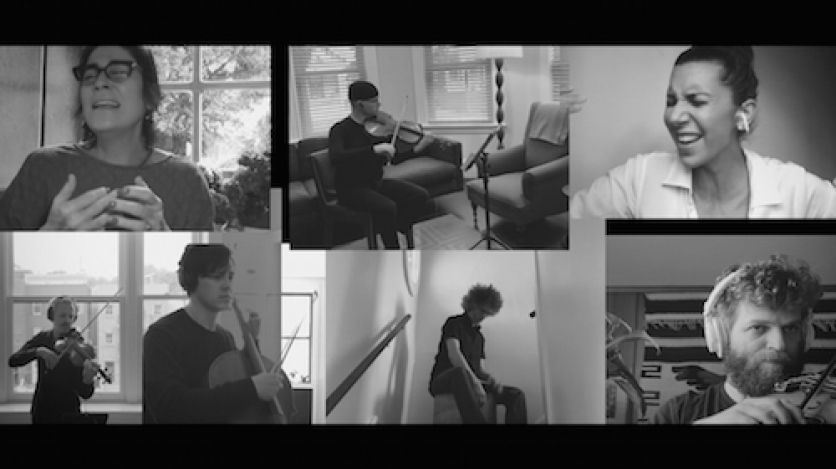 Magos Herrera and Brooklyn Rider return with an online premiere of the classic Uruguayan anthem, along with new guests Mathias Kunzli, Adrien Tillmann, and Mônica Salmaso.

Admission: This will be a live webcast. No registration is needed to watch.

Magos Herrera and Brooklyn Rider are back on our series with a new version of the Uruguayan classic anthem “A redoblar,” in a new arrangement by Sebastián Zubieta, video by French video artist Adrien Tillmann, with percussion by Mathias Kunzli, and Latin Grammy-nominated Brazilian singer Mônica Salmaso making their virtual debut with us!
Special thanks to Bill Siegmund at Digital Island Studios, LLC!

Born in Mexico City and currently based out of New York City, Magos Herrera is a jazz singer-songwriter, producer, and educator, regarded as one of the most expressive, beautiful voices and most active vocalists in the contemporary Latin American jazz scene. She has recorded six solo albums and worked on joint collaborations for two more albums with producer Javier Limón, in addition to having participated as a guest artist of several recordings and albums. An accomplished artist, Herrera has performed in a variety of leading international cultural venues and has been part of the line-up of some of the most memorable jazz festivals around the world.

With her “gorgeous, quintessentially Brazilian voice,” (New York Times) Latin Grammy-nominated Brazilian singer Mônica Salmaso has been performing and recording for 30 years. Her collaborators include some of the most distinguished Brazilian musicians, including Guinga and Paulo Bellinatti.

Hailing from Switzerland, multi-disciplined drummer/percussionist Mathias Kunzli currently splits his time between Los Angeles and New York City. He can be found performing around the globe in a variety of styles with artists and bands of many backgrounds. Additionally, his original work is featured in Film, TV and other multi-media platforms.

Adrien H. Tillmann is a French photographer based in Manhattan, born from a French-German family near Paris. His photography, dedicated to the jazz world, can be seen in various parts of the globe, including on the walls of the legendary New-York Jazz clubs The Village Vanguard and Birdland.

Made with support from MetLife Foundation
Special thanks to Maestro Dobel