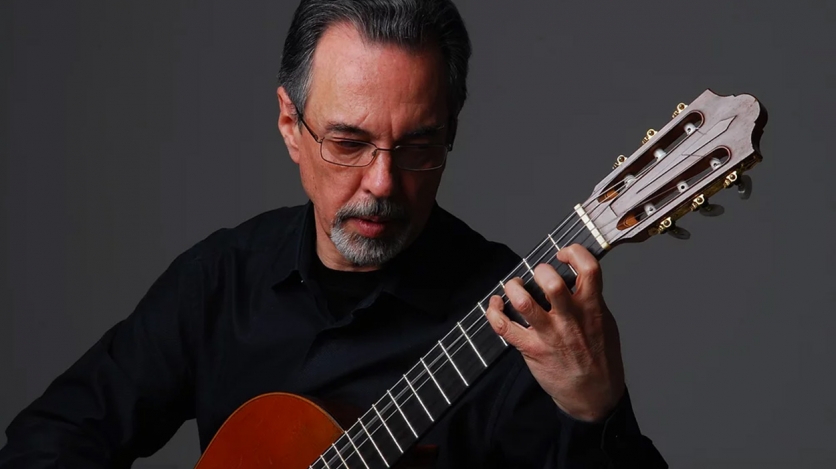 The Uruguayan guitarist returns to our series with a program of music by Manuel Ponce.

This event will take place in front of a live audience, and tickets are free. To reserve your seat, please email gportale@as-coa.org.

Video of this concert will be available on this page on July 15.

Americas Society will require proof of COVID-19 vaccination for anyone entering our building. All guests will be required to wear masks.

The master Uruguayan guitarist is back on Music of the Americas forty-five years after his debut with a concert dedicated to the music of Mexican composer Manuel Ponce, one of the most prolific composers of the last century.

Eduardo Fernández is recognized as one of today's leading guitarists. Born in 1952 in Uruguay, he began his studies of guitar at age seven. His principal teachers were Abel Carlevaro, Guido Santórsola, and Héctor Tosar. After being prized in several international competitions, the most notable being the 1972 Porto Alegre (Brazil) and 1975 Radio France (Paris) competitions, he won the first prize of the 1975 Andrés Segovia Competition in Mallorca (Spain). His New York debut in 1977, presented by Americas Society, won critical accolades, and he was described as "A top guitarist... Rarely has this reviewer heard a more impressive debut recital on any instrument" (Donal Henahan, The New York Times). Fernández has returned to the U.S. almost every season since then, playing with prestigious orchestras and giving recitals, always to great acclaim from critics and audiences. His London debut in 1983 at Wigmore Hall also had a great impact, as it resulted in him signing an exclusive recording contract with Decca, a label for which he made 18 recordings (solos, and with the English Chamber Orchestra and the London Philharmonic), that cover a wide section of the repertoire, from Bach to new music.

His albums include many first recordings (Berio's "Sequenza XI" and Héctor Tosar's “Gandhara”). Several of them have been selected as "best of the month" and "best of the year" by publications such as Stereo Review and Asahi Shinbun from Japan. He has recorded most of Paganini's work for violin and guitar with violinist Alexander Markow for Erato and three duo CDs with Japanese guitarist Shin-Ichi Fukuda (with whom he has also performed in the Far East, South America, and Germany) for DENON in Japan. Currently he is exclusive recording artist of the Oehms Classics label, for which he has recorded the complete lute suites by Bach and Romantic Guitar, a 19th-century guitar recording on a period instrument, one CD of guitar music from South America, and an all-Giuliani CD, Varie Idee Sentimentali. He also recorded for Labor Records from the U.S. with the CD "Between Two Worlds." He also has a vivid interest in historical instruments, and he plays often the repertoire of the 19th century on a period guitar.

Fernández is also active as a teacher, having taught several years at the University's School of Music in Montevideo, where he is now a fellow researcher. He is also very much in demand for masterclasses and lectures all around the world. Since 2002 he has been conducting annual masterclasses in Germany ("Gitarre und Natur," Erlbach). He wrote a major book on guitar technique (Technique, Mechanism, Learning, published by Chanterelle Verlag, Heidelberg and in Spanish edition by ART Ediciones, Montevideo), a book of essays on Bach's lute music, published in 2003 by ART Ediciones, and several articles in leading guitar publications. Currently, he is preparing a work on the first generation of 19th-century guitarist-composers.

Also an active composer, he was the secretary of the Uruguayan branch of ISCM for two years. He was also a founder of Uruguay's CIM/UNESCO section and was artistic director of the short-lived Montevideo's biannual International Guitar Festivals (1996 to 2000). Currently, he is artistic director of Colombia's Encuentros Nacionales de la Guitarra since 2000.

Manuel Ponce was born in 1882 in Fresnillo, a city in Zacatecas about five hundred miles Northwest of Mexico City, where he died in 1948. He is one of Mexico's most important composers of the past century and a pioneer of musical nationalism. His catalogue contains over 300 compositions. Additionally, he was also a writer and editor of three influential music journals: Revista Musical de México (Mexico City, 1919–1920), Gaceta Musical (Paris, 1928–1929), and Cultura Musical (Mexico City, 1936–1937). Ponce studied music in Mexico City, Bologna, Berlin, and in Paris at the École Normale de Musique with Paul Dukas. He is the author of the immensely popular song "Estrellita," which he composed in 1912, and a major figure in the guitar repertoire, with pieces featuring the instrument in chamber, orchestral, and solo settings.

The MetLife Foundation Music of the Americas concert series is made possible by the generous support of Presenting Sponsor MetLife Foundation. The Fall 2021 Music program is also supported, in part, by public funds from the New York City Department of Cultural Affairs in partnership with the City Council, and by the Howard Gilman Foundation.

Additional support for this concert comes from the Augustine Foundation.