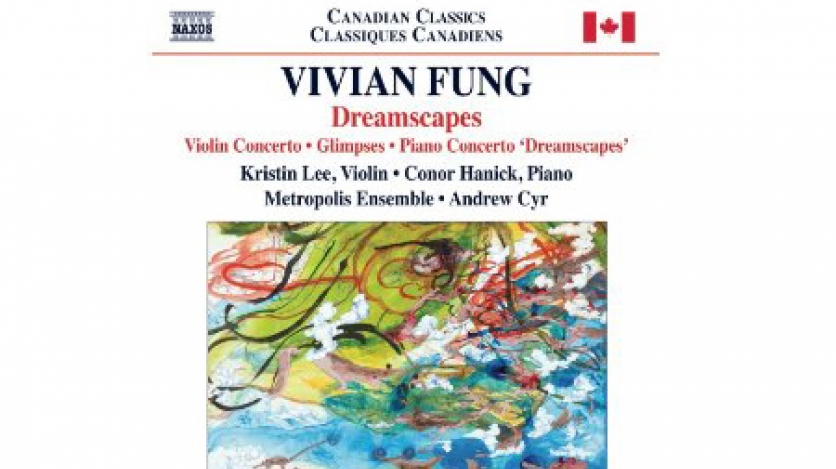 The Americas Society will host a discussion with classical music label Naxos in honor of the label's twenty-fifth anniversary and the launch of their new Canadian classics series.

Admission Fee: FREE for AS Members; $10.00 for non-members; $15.00 Special Ticket Offer*. No additional fees will be charged when purchasing online.

Since 1987, Naxos has redefined how classical music is presented and marketed. As part of this innovative approach, the label launched Canadian Classics in 2011. The latest release in the series is Dreamscapes, an album of music by Vivian Fung performed by Grammy-nominated Metropolis Ensemble and Canadian/American conductor Andrew Cyr.

Audience members will be invited to participate in a brief performance of the opening section of this work.

A New York premiere for solo violin and piano.

Ms. Fung discusses the creation of the album and the stylistic origins of her composition process.

Dreamscapes is a world premiere recording of three works by Edmonton-born composer Vivian Fung released on Naxos. The recording features Ms. Fung's acclaimed Violin Concerto (2011) and Piano Concerto Dreamscapes (2009), performed by Metropolis Ensemble with conductor Andrew Cyr, violinist Kristin Lee, and pianist Conor Hanick; and her Glimpses for prepared piano (2006), performed by Mr. Hanick. All three of the works on the new recording have drawn their inspiration from Ms. Fung's travels to Bali.

The concertos, both commissioned by Metropolis Ensemble*, were recorded at Seiji Ozawa Hall at Tanglewood and produced by two-time Grammy winner Tim Martyn.

This event will also serve as a celebration of the launch of Naxos' new Canadian Classics series, modeled on Naxos American Classics, the highly acclaimed series featuring music by American composers. Naxos Canadian Classics will release 6 to 8 new CDs per year, with composers from across Canada and covering the major areas of classical music: orchestra, large ensemble, vocal, chamber, and solo instrumental music. In launching this new series, Naxos founder Klaus Heymann said: "I am pleased to announce the launch of Naxos Canadian Classics. Naxos has been recording outstanding Canadian musicians for many years. With this series we can now pay attention to Canada's fine composers as well." Dreamscapes will be the third release on this series.

*Special offer is available only for online purchases and will expire on Friday, September 28, 2012 at 5pm.