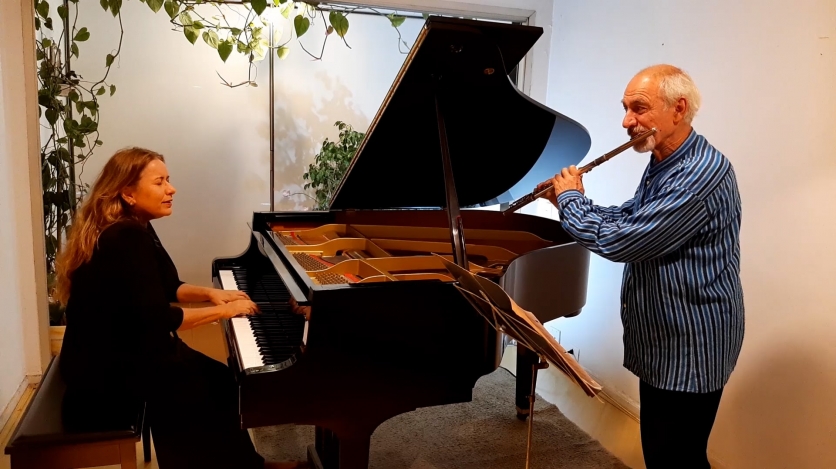 Our virtual series continues with a week of new performances by musicians from Brazil and Cuba.

Music of the Americas continues its online video series En Casa (At Home), featuring original daily performances with musicians from around the Americas, and Recuerdos (Memories), weekly releases of memorable past performances at the Americas Society, which takes a break this week.
En Casa focuses on the piano, with three videos featuring the instrument: two by Heloísa Fernandes and one by Ahmed Alom.

We are also very excited to launch the 2020–2021 season of the MetLife Foundation Music of the Americas Concert Series on Friday, with a concert by the fabulous Renato Borghetti Quartet recorded live in Porto Alegre last month. The season will be online only, and during the fall, we will offer five concerts conceived specifically to be enjoyed over the internet.

Brazilian pianist and composer Heloísa Fernandes gave a wonderful solo recital on our stage years ago, and has since continued to develop her career. Born in the city of Presidente Prudente in the state of São Paulo, she went on to study with Paulo Gori and Gilberto Tinetti, and received degrees in piano performance from the Conservatório Dramático e Musical de São Paulo, in conducting from the Centro de Estudos Tom Jobim, and in composition from the Universidade de São Paulo. Her repertoire focuses on instrumental interpretations of popular Brazilian music. She sent us two original compositions from her home in São Paulo. In the first one, Abraços (Hugs), she is joined by flutist Toniho Carrasqueira, a flutist equally at home in the world of classical and popular music, who has released albums of music from the baroque to contemporary choro. Carrasqueira studied in Brazil and in Europe, and is currently based in São Paulo, working as a soloist and educator.

Pianist Ahmed Alom was born in Havana in 1998. He started his musical studies in Havana, before moving to Mexico City and New York City, where he studies with Solomon Mikowsky at the Manhattan School of Music. He has won several prizes including the first prizes at the XXI Xalapa Piano Competition in Mexico, the Maria Clara Cullell Piano Competition in Costa Rica, and the UNEAC Piano Competition in Cuba, among others. He made his orchestral debut at age 17 with Mark Belenko conducting the Orquesta Filarmónica de la Ciudad de México in Rhapsody in Blue by George Gershwin. Alom is also a jazz and Latin jazz pianist, appearing in international festivals. He has performed with Paquito d’Rivera (Lincoln Center), the MSM Afro Cuban Jazz Band, the Pedro Giraudo Tango Quartet, and with Jorge Glem. Alom sent us his riveting version of Moszkowsky's Caprice espagnol from his home in New York.

The second of Fernandes’s videos this week features her playing her composition Colheita (Harvest). Her work as a composer is a study in the power of contrasts—delicacy and driving rhythm, introspection and joyous dance, elegance and playfulness. With this vast artistic vocabulary, Fernandes reveals a Brazil largely unknown, even to Brazilians.

The Renato Borghetti Quartet makes their Music of the Americas debut in a vibrant program with a contemporary and explosive mix of gaúcho musical styles including tango, polka, chamamé, milonga, with flamenco and a dash of Brazilian pop and jazz. The quartet recorded a program live in Porto Alegre’s historic Theatro São Pedro, founded in 1858.

This concert will be streamed here. As a special addition to this season’s concerts, we will host a virtual reception with the musicians after each performance. Americas Society members can register by emailing membership@as-coa.org. If you’re not yet a member and would like to join us, please do so here!

The MetLife Foundation Music of the Americas concert series is made possible by the generous support of Presenting Sponsor MetLife Foundation. The Fall 2020 Music program is also supported, in part, by public funds from the New York City Department of Cultural Affairs in partnership with the City Council. The Renato Borghetti Quartet concert is supported by the Consulate General of Brazil in New York.