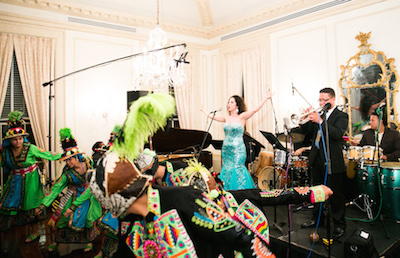 Music of the Americas continues its online video series En Casa (At Home), featuring original daily performances with musicians from around the Americas, and Recuerdos (Memories), weekly releases of memorable past performances at the Americas Society, some for the first time.

Puerto Rican saxophonist and composer (and MacArthur Fellow) Miguel Zenón sent us a solo improvisation on the traditional Seis Villarán boricua. This is typically a vocal musical genre, in which the voice is accompanied by the Puerto Rican cuatro (a guitar-like folk instrument not to be confused with the homonymous Venezuelan/Colombian instrument played by Jorge Glem last week in this video. Miguel's solo version is as swinging as the original while it adds a generous dose of lyricism.

The Merdinian siblings, from Córdoba, Argentina, moved to New York to study over twenty years ago. Among the many things they do is the New Docta Festival, a yearly festival that takes place in Argentina every August, which they direct in collaboration with cellist Yves Dharamraj. The project presents concerts and educational activities for thousands in both their native city and Buenos Aires. Their video features the siblings in a virtual performance with Yves.

Pedro Giraudo, Grammy-winning bassist, composer and bandleader plays several kinds of music, but he focuses his effort on the tango, to which he dedicates his Big Band. For his En Casa video, however, he chose to play the Prelude from Bach's D minor Cello Suite. He recorded in his basement, not because of his daughters, who understand their dad's need for silence from time to time, but because of his Yorkie, who doesn't understand its dad is occasionally unavailable.

Galician historical harpist Manuel Vilas is one of the leading specialists of his instrument and a scholar dedicated to the research dissemination of baroque music from the Spanish world. Recently, he reconstructed a harp used in Oruro from the seventeenth century, which he plays in the baroque piece he sent us: Marionas, by Lucas Ruiz de Ribayaz, a Spanish composer who made a career in Lima at the end of the seventeenth century.

We dig through our archives and uncover Bolivian gems from past performances at Americas Society including exciting artists like Momenta Quartet and Gian-Carla Tisera.

Franco Pinna, Argentinean percussionist based in New York, sent us One Day at a Time, his musing on the hard times that we are all going through. The piece features his unique instrumental setup, which includes a variety of unconventional instruments, including the “arpa legüera,” a percussion/string instrument that evokes the sounds of a Charango, African Kora, and Asian Koto. He created it in 2013 and named it after the materials used in its construction, which include guitar strings and a traditional Bombo Legüero as a resonator.