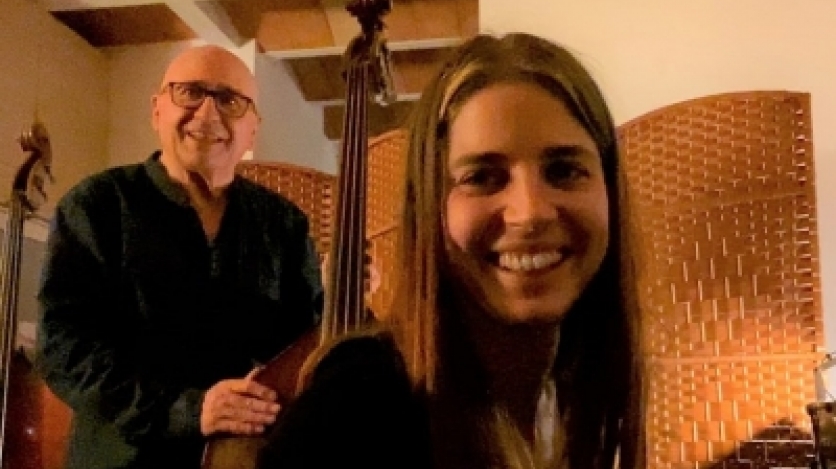 Music of the Americas: En Casa and Recuerdos, November 3-6

Our virtual series continue with performances by Eunice Padilla, Horacio and Lucía Fumero, Alexandre and Douglas Lora, and the Renato Borghetti Quartet.

This week, we have new videos coming from Mexico, (Eunice Padilla), Spain (Lucía and Horacio Fumero), and Brazil (Alexandre and Douglas Lora), as well as one of the wonderful pieces included in Renato Borghetti Quartet's concert earlier this season.

Argentine bassist Horacio Fumero has lived in Spain since the 1960s, and has since become one of the most sought-after bassists in the Spanish jazz scene. His daughter Lucía Fumero joins him on the piano for this beautiful rendition of Julio Argentino Jerez's Torcacita, a 1940s classic of Argentinean folklore, recorded at home in Barcelona. Both Lucía and Horacio return to En Casa later this month, in a week curated by our friend, music critic Sandra de la Fuente.

Mexican early keyboard specialist Eunice Padilla sent us another set of pieces from the Cuaderno de Tonos de Maitines de Sor María Clara del Santísimo Sacramento, one of the few collections of organ music written in the Americas during colonial times. Sor María Clara was a nun living in Oaxaca at the beginning of the 19th century who compiled this cuaderno of locally composed music (it is not clear whether she composed the pieces herself). This week we share the first set of pieces, which Padilla recorded at home in MExico City on a modern fortepiano by Paul McNulty.

The Renato Borghetti Quartet made their Music of the Americas debut last month in a vibrant program featuring a contemporary and explosive mix of gaúcho musical styles mixed in with flamenco, Brazilian pop, and jazz. We’ve selected one of our favorites from this amazing concert.

Since Alexandre and Douglas participated in En Casa in September, we have been looking forward to hear them in a guitar and handpan duo, so we are very happy they sent us this video from their house in the state of São Paulo.

The MetLife Foundation Music of the Americas concert series is made possible by the generous support of Presenting Sponsor MetLife Foundation. The Fall 2020 Music program is also supported, in part, by public funds from the New York City Department of Cultural Affairs in partnership with the City Council. The Renato Borghetti Quartet concert was supported by the Consulate General of Brazil in New York.