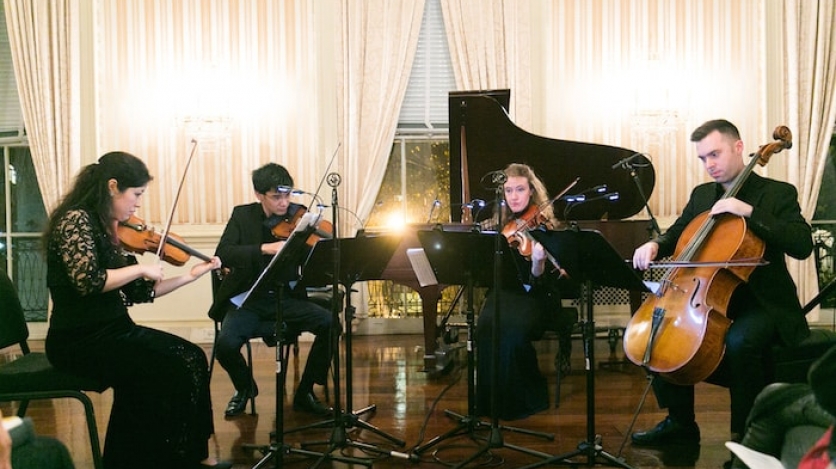 Momenta Quartet returns to Americas Society on October 15 for the fifth edition of their annual festival of new music.

Online registration for this event has now been closed.

(registration requests will not be taken over the phone)

During the fifth Momenta Festival, celebrating the quartet's fifteenth anniversary, Music of the Americas will present two evenings of new music with these talented musicians and include world premieres by esteemed composers Matthew Greenbaum, Alvin Singleton, Roberto Sierra, and Christopher Stark.

Each evening of the Momenta Festival will honor a member's individual artistry and be overseen by a different member of the quartet.

Opening night, curated by Stephanie Griffin, Momenta’s founding violist, celebrates the quartet's anniversary with selected milestones from their unique and eclectic repertoire. Along with a world premiere by Greenbaum featuring baritone Nathaniel Sullivan and conductor David Bloom. They will also present the Chamber Music America commission by Singleton.

This commission has been made possible by the Chamber Music America Classical Commissioning Program, with generous funding provided by The Andrew W. Mellon Foundation.

Momenta: the plural of momentum—four individuals in motion towards a common goal. This is the idea behind the Momenta Quartet, whose eclectic vision encompasses contemporary music of all aesthetic backgrounds alongside great music from the recent and distant past. The New York City-based quartet has premiered over 150 works, collaborated with over 200 living composers and was praised by The New York Times for its “diligence, curiosity and excellence.” In the words of The New Yorker’s Alex Ross, “Few American players assume Haydn’s idiom with such ease.”

The quartet came into being in November 2004, when composer Matthew Greenbaum invited violist Stephanie Griffin to perform Mario Davidovsky’s String Trio for events celebrating Judaism and Culture at New York’s Symphony Space and Temple University in Philadelphia. A residency through the composition department at Temple University ensued, and the rehearsals and performances were so satisfying that the players decided to form a quartet. Through this residency, Momenta gave two annual concerts highlighting the talents of Temple University student composers alongside twentieth-century masterworks and works from the classical canon, and repeated the programs at the Brooklyn Society for Ethical Culture. From the outset, Momenta treated all music equally, devoting as much time, care, and commitment to the student works as to the imposing musical monuments.

Word of Momenta’s passionate advocacy for emerging composers spread quickly. Composers started inviting Momenta for similar concerts and residencies at other academic institutions, among them Harvard, Brown, Cornell, and Columbia Universities; the Boston and Cincinnati Conservatories; and the Eastman School of Music. Momenta received two Koussevitzky Foundation commission grants: for Malaysian composer Kee Yong Chong in 2009 and for Bolivian composer Agustín Fernández in 2011. He also received a Barlow Foundation commission for Claude Baker in 2016, a Jerome Foundation grant to commission Eric Nathan in 2013, and a Chamber Music America commission for Alvin Singleton, whose new work will be featured prominently in the 2018–19 season. Deeply committed to the musical avant-garde of the developing world, Momenta has premiered and championed the works of Tony Prabowo (Indonesia), Cergio Prudencio (Bolivia) and Hana Ajiashvili (Georgia). Upcoming adventures include a project to perform and record all thirteen string quartets by Mexican microtonal maverick Julián Carrillo (1875–1965) over the next three years.

Highlights of Momenta’s 2018–2019 season include a residency at The Laredo Institute in Cochabamba, Bolivia, and closer to home residencies at Bates and Williams Colleges, collaborations with the Cornell University gamelan ensemble and student composers at Brown University, and recitals presented by Arbor Music, Chamber Music Live at Queens College, and the Mexican Cultural Institute in Washington, DC. Momenta will also continue its collaboration with Mexican actor/director Fernando Villa Proal on “The Lost String Quartet,” a theatrical string quartet for children with an original score by Stephanie Griffin.

Stephanie Griffin is an innovative composer and violist with an eclectic musical vision. Born in Canada and based in New York City, her musical adventures have taken her to Indonesia, Singapore, Japan, Hong Kong, England, Ireland, Germany, Belgium, Mexico, and Mongolia. Stephanie founded the Momenta Quartet in 2004 and is a member of the Argento Chamber Ensemble and Continuum, principal violist of the Princeton Symphony, and viola faculty at Brooklyn and Hunter Colleges. She received prestigious composition fellowships from the Jerome Foundation (2017) and the New York Foundation for the Arts (2016), and was a 2014 fellow at Music Omi. She holds a doctor of musical arts from the Juilliard School where she studied with Samuel Rhodes, and has recorded for Tzadik, Innova, Naxos, Aeon, New World, and Albany records.

Lauded by the New York Times as “brilliant” and by France’s ClassiqueInfo for her “excellent technical mastery” and “undeniable sensitivity,” violinist Emilie-Anne Gendron enjoys an active freelance career based in New York. A deeply committed chamber musician, Gendron has appeared with A Far Cry, Argento Ensemble, Chamber Music Society of Lincoln Center, Chamber Orchestra of Philadelphia, Ensemble Échappé, Gamut Bach Ensemble, Talea Ensemble, Sejong Soloists, and with the touring musicians from Marlboro. Her extensively varied international appearances have included recitals in Sweden and at the Louvre in Paris, festivals in Russia, Finland, and Jordan, and recently major venues in China, South Korea, Argentina, Chile, and Colombia. She was trained at the Juilliard School where her teachers were Won Bin Yim, Dorothy DeLay, David Chan, and Hyo Kang. She holds a B.A. in classics from Columbia as a graduate of the Columbia-Juilliard joint-degree program, and a master’s of music and the coveted artist diploma from Juilliard.

Praised by the New York Times as “spellbinding,” violinist Alex Shiozaki is emerging as a strong advocate for the music of today. At home with music new and old, he has appeared as a soloist with orchestras including the Sendai Philharmonic, AXIOM Ensemble, and the Juilliard Orchestra. Other highlights include summer residencies at the Tanglewood Music Center as a New Fromm Player and a Japan tour with the Metropolitan Opera Orchestra. A member of the Momenta Quartet since 2016, he also regularly performs with Le Train Bleu, ACME, and Argento Ensemble. As part of the Shiozaki Duo with his wife and pianist Nana Shi, Shiozaki has given recitals in New York, Massachusetts, Washington DC, and California. Holding a B.A. from Harvard College and an M.M. and D.M.A. from the Juilliard School, he counts among his teachers Ronald Copes and Joseph Lin of the Juilliard String Quartet, Lynn Chang, and Robin Sharp.

Michael Haas is an accomplished and exciting young cellist, performing in New York City and around the world. In a recent performance, his playing was noted as “refined and attractive” by the New York Times. Leading a varied musical life, Haas is equally at home performing chamber music and orchestral repertoire both old and new. He recently appeared performing at Symphony Space, the New York Live Arts Theater, Le Poisson Rouge, as well as for Tertulia, a new series bringing chamber music to intimate settings around New York City. In addition to his work with Momenta, Hass has been a member of the New Haven Symphony since 2008. He regularly performs with the Princeton Symphony and in New York with the Orchestra of St. Luke’s. Haas holds degrees from the Curtis Institute of Music and the Juilliard School, studying with David Soyer, Peter Wiley, Joel Krosnick, and Darrett Adkins. Also an active teacher, he received Suzuki teaching certification from New York’s School for Strings and has taught at the CUNY Bronx Community College.