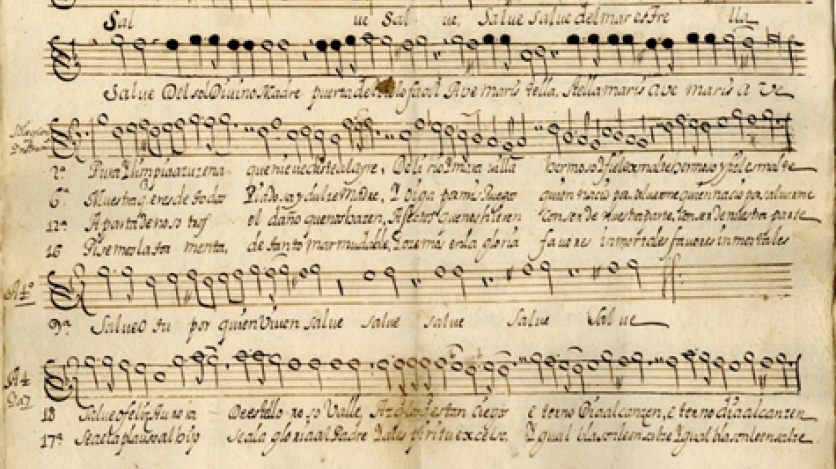 Admission: FREE and open to the public.

Americas Society's choral ensemble, Meridionalis, is led by Sebastián Zubieta in "Luna sin mancha, Sol sin ocaso," a program dedicated to polychoral music from the Olmeda Collection at The Hispanic Society Museum & Library by composers including Tomás Luis de Victoria, Juan de Madrid, Mateo Romero, Diego de Cáseda, and Manuel de Egüés. Music for multiple choirs of voices and instruments was an important part of Spanish liturgical music throughout the Baroque period. The main cathedrals in all corners of the empire regularly presented imposing music that took advantage of the space and acoustics of the temples.

About the Olmeda Collection

The music collection at the HSA is one of New York City’s best-kept secrets: this musical trove—one of the largest dedicated to Spanish vocal music outside Europe—is constructed from the library of Federico Olmeda, organist at the cathedral in Burgos and distinguished scholar of his country’s music. Olmeda’s music library, acquired by the HSA from a respected antiquities dealer who had acquired the late organist’s estate, includes manuscripts and rare editions of scores and musical treatises spanning from the fifteenth century to the date of compilation, in the late nineteenth century, which the musician had carefully gathered throughout the country. Olmeda had a keen curatorial eye and had possibly intended this repertoire to be the documentary basis on which to build his own history of Spanish music, which he could not complete. The Olmeda collection includes musical treasures that have remained inaccessible for centuries, and no piece in it is devoid of interest. In the prologue to the collection, the bookseller indicated, quite accurately, that “A collection like Olmeda cannot have piled up pieces of music without regard to their intrinsic value. As the dates and the handwritings prove, the parts were written in the seventeenth and eighteenth century … [and] they surpass by far the value of mere copies with their frequent inexactnesses and arbitrary alterations, so that they may be regarded as original materials of high importance for the study of ancient Spanish music.”

Directed by Zubieta, the Americas Society's critically-acclaimed vocal ensemble, Meridionalis, comprises leading choral soloists in New York City. The ensemble has performed early music from the hemisphere since its debut in 2010, including music from Bolivia, Brazil, Guatemala, Mexico, and Peru. They have performed at a diverse range of venues and festivals, including Symphony Space's Wall to Wall festival (New York City), the Raritan River Music Festival (New Jersey), St. Paul’s Chapel at Columbia University with Clarion Society, The Hispanic Society of America, and Americas Society, as well as at the Biblioteca Juan Ángel Arango in Bogotá with Ensemble Lipzodes, and at the Festival Esteban Salas in Havana with Ars Longa. Recent concerts include a program of sacred choral music by Mexican seventeenth-century composer Francisco López Capillas, who was Kapellmeister at the cathedrals in Mexico City and Puebla for decades, at The Hispanic Society of America, and "Con la armonía del cielo: Christmas in Seventeenth-century Guatemala," presented at St. Paul’s Chapel as part of Trinity Wall Street's Twelfth Night Festival.

Sebastián Zubieta has been music director at Americas Society since 2005. He has presented papers on baroque and contemporary music at congresses including the Society for American Music (2011), the International Musicological Society in Leuven (2002), and the IMS Regional Association for Latin America and the Caribbean in Havana (2014). He led a workshop on nineteenth-century Latin American music at Folkwang Universität der Künste in Essen (2010), and taught hearing and analysis and music appreciation at Yale, music history at the Universidad de Buenos Aires, and composition at the Universidad Nacional de La Plata in Argentina. He made his New York conducting debut to critical acclaim with Meridionalis, a group dedicated to Latin American early music, at the Look and Listen Festival in 2010 with music by Guiterre Fernández Hidalgo. He has appeared as a conductor at Music of the Americas, Symphony Space’s Wall-to-Wall, the Raritan River Valley Festival, the Biblioteca Juan Ángel Arango in Bogotá, as well as at the Festival de Música Sacra de Quito, the Festival de Música Antigua Esteban Salas in Havana, and the Centro de Experimentación del Teatro Colón. His music has been performed in concerts and festivals in Europe, South Korea, Latin America and the United States, by musicians including ICE, Continuum Ensemble, the New York Miniaturist Ensemble, the Momenta Quartet, violist Antoine Tamestit, and clarinetist Joshua Rubin. He has written music for ICE, the Centro Cultural General San Martín, the Centro de Experimentación del Teatro Colón, the New York Miniaturist Ensemble, pianist Stephen Buck, the Bugallo Williams Piano Duo, and the Damocles Trio, commissioned by Look and Listen. He was in residence at The Banff Centre and was a fellow at the Composers Conference at Wellesley College. He holds a doctorate in composition from Yale University and a licentiate in musicology from Universidad Católica Argentina in Buenos Aires.

Bernardo Illari is a specialist in Latin American music from the colonial and early national periods. He received his PhD in music history from the University of Chicago in 2002, with a dissertation entitled, "Polychoral Culture: Cathedral Music in La Plata (Bolivia), 1680–1730." Illari's second book-size project, Domenico Zipoli: Para una genealogía de la música clásica latinoamericana ("Domenico Zipoli: Towards a Genealogy of Latin American Classical Music") was awarded the 2003 Premio de Musicología "Casa de las Américas." Prior to his appointment at University of North Texas, Illari held academic positions at the Universidad Nacional de Córdoba (Argentina) and the University of Hong Kong. He has also taught classes at the Universidad de Valladolid, Universidad Complutense de Madrid, and Conservatorio de Salamanca (Spain). Since 1992, he has contributed scores, advice, and notes to several European-based early music soloists and ensembles, including Ensemble Elyma, The Rare Fruit Council, Grupo Vocal Gregor, Cuarteto Jacarandá, and others, which resulted in 15 CDs of colonial music from Peru and Bolivia. These projects include the edition of the operas La púrpura de la rosa (by Tomás de Torrejón y Velasco, 1701) and San Ignacio de Loyola (as compiled by Martin Schmid, Santa Ana de Chiquitos, c. 1762), monographic CDs dedicated to works by Domenico Zipoli, Tomás de Torrejón y Velasco, and Juan de Araujo, along with thematic projects such as villancico settings of Sor Juana Inés de la Cruz's poetry and Fiesta Criolla, the musical representation of a colonial festival in Chuquisaca, Bolivia.

Image courtesy of the Olmeda Collection at The Hispanic Society Museum & Library.