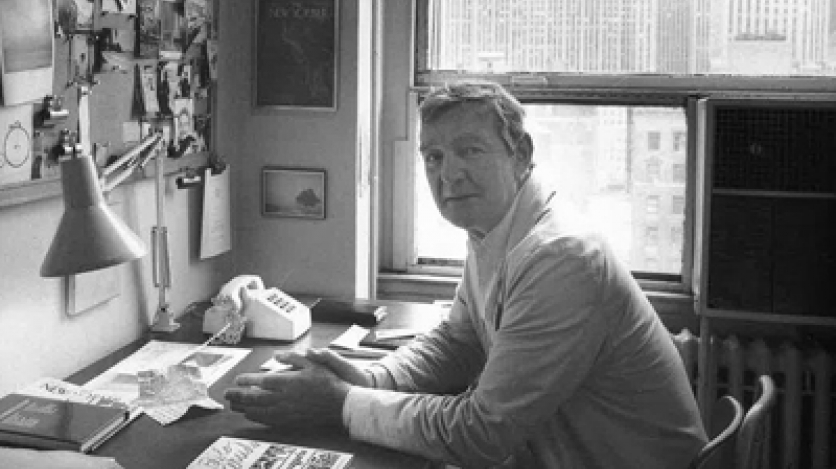 Friends and colleagues of the late Scottish poet, essayist, and translator will honor the man and discuss his formidable contribution to world culture.

Online registration is closed but members may arrive before the event and pick up tickets. Non-members may pay at the door. Please email literature@as-coa.org with questions.

Admission: Free for Americas Society Members; $10 for non-members. Not yet a member? Join now!

Friends and colleagues of the late Scottish poet, essayist, and translator will honor the man and discuss his formidable contribution to world culture. Reid was known in particular for his work on Jorge Luis Borges and Pablo Neruda, as well as for his verse, prose, and his contributions as a staff writer for The New Yorker. This program will feature translators, authors, and scholars Edith Grossman, Gregory Rabassa, Pura López-Colomé, Karen Benavente, and others.

Alastair Reid (b. 1926, Whithorn, Galloway, Scotland; d. 2014, New York) distinguished himself as a poet, essayist, and translator, particularly of the authors Jorge Luis Borges and Pablo Neruda. Raised as the son of a clergyman and doctor, he served in the Royal Navy during WWII decoding ciphers as well as studying Classics at the University of St. Andrews. He left his homeland for other countries, over the next decades living in the United States and Europe—working in Mallorca as the secretary of author Robert Graves—and later throughout South America and the Caribbean, particularly the Dominican Republic, before returning to New York in his later years.

Reid is perhaps best known for his instrumental role in bringing the poetry of Borges and Neruda into English with his lauded translations. His translations of Borges have been collected in his Borges: A Reader (1981), co-edited with Emir Rodríguez Monegal, in Borges’s Selected Poems (2010), and elsewhere. His translations of Neruda appear in Extravagaria (1972) and in many other subsequent collections. In addition to his published translations of Borges, Neruda, and others, such as Cuban poet Heberto Padilla and Mexican poet José Emilio Pacheco, Reid was the author of many additional publications, including Weathering (1978), an early selected poems and translations; Oases (1997), a collection of prose and poetry addressing his friendships with authors including Robert Graves, Borges, Neruda; Inside Out (2008), poems and translations; and Outside In (2008), collected essays and fiction; as well as children’s literature and travel writing.

He wrote for The New Yorker as a travel correspondent for many years, under the editorship of William Shawn, producing seminal essays on Latin American literature, among them, his classic “Basilks’ Egg” (1976). He wrote the preface for a limited edition of Gabriel García Márquez’s One Hundred Years of Solitude, translated by Gregory Rabassa and published in 1982. Alastair Reid was recognized in his native Scotland as well as internationally as a leading literary figure of the twentieth century, admired for his craftsmanship in poetry, prose, and translation alike. Indeed, the hallmark of both the author and his body of work is their internationalism, his worldwide view, which reveals itself over and over in whatever text the master put his hand to. “What drew me to writing was its portability,” he wrote. “It requires essentially no more than a notebook and a pencil, and it allowed me to own my own time, to travel light, to come to rest anywhere.”

Karen Benavente, associate professor at the University of Glasgow, specializes in Latin American and Brazilian twentieth-century poetry, particularly that of Borges, Cecília Meireles, Gabriela Mistral, and Jorge Teillier. She met and worked with Alastair Reid at Harvard while completing her dissertation on Borges and Fernando Pessoa. In 2011, she organized an exhibition on Reid’s life at the University of Glasgow. She is now completing a manuscript on Borges’ poetry.

Pura López Colomé’s books of poems have been collected in Poemas reunidos 1985-2012 (2013), and her essays in Afluentes (2011). Her work has been translated by Forrest Gander in the collections No Shelter and Watchword. In 2007 she was awarded the Premio Xavier Villaurrutia for Santo y seña. She has translated the work of Seamus Heaney, Philip Larkin, Alastair Reid, and William Carlos Williams. Her most recent book of poems is Via Corporis, in collaboration with artist Guillermo Arreola. With Reid, López Colomé conceived and produced Resonancia, Poesía en dos lenguas/Resonance, Poetry in Two Languages (2011), a three-CD boxed set featuring poetry by stellar English- and Spanish-language poets.

Gregory Rabassa is professor emeritus of comparative literature and romance languages at the CUNY Graduate Center and translator of iconic writers including Jorge Amado, Julio Cortázar, Gabriel García Márquez, Clarice Lispector, Nélida Pinon, and Mario Vargas Llosa. He has received a National Book Award and National Medal of Arts, among numerous other accolades.