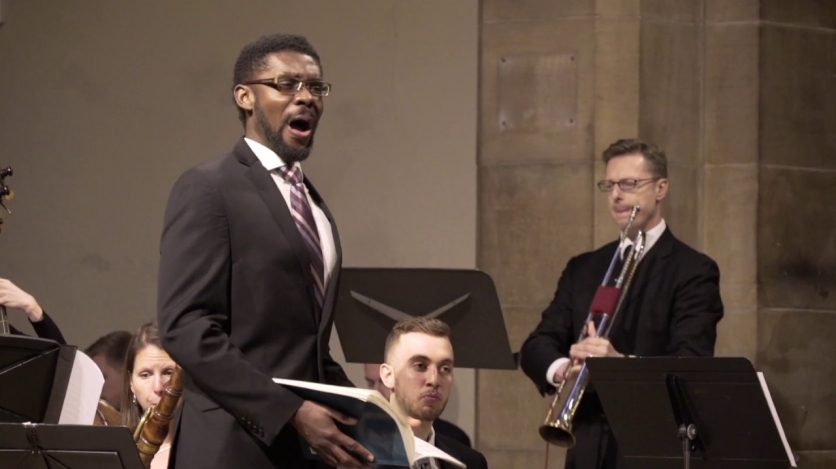 The Haitian singers follow the trajectory of a baroque melody through the Caribbean.

Overview About the Artists Sponsors
November 11, 2022

On November 11, we will host this concert in person, and tickets are free. Please email Gina Portale to reserve your seat.
Video of the concert will be released at a later date. Remember to follow us to watch this and other exciting performances. All guests will be required to provide proof of vaccination and wear masks.

Baritone Jean Bernard Cerin and soprano Melissa Joseph, joined by Stephen Gamboa-Diaz on harpsichord and piano, present a program based on Cerin's research which explores the tale—across centuries and continents—of “Lisette quitté la plaine,” an enduringly popular song from Haiti that provides an uncanny pathway to highlight classical music by and about people of African descent.

Praised for his “burnished tone and focused phrasing,” Haitian baritone Jean-Bernard Cerin has charmed audiences throughout the United States, France, Austria, and his native Haiti. A gifted recitalist, he won the Gerard Souzay Prize for best performance of a French Mélodie at the Joy in Singing International Song Competition in 2018. On the concert stage, Cerin has appeared with leading early music ensembles throughout the United States including Cleveland’s Les Délices, American Bach Soloists in San Francisco, Philadelphia Chamber Music Society’s Gamut Bach Ensemble, Piffaro Renaissance Wind Ensemble, Louisville’s Bourbon Baroque, and the Philadelphia Bach Festival. This season, Jean Bernard debuts with the Greater Bridgeport Symphony in CT, Classical Uncorked in Seattle, and the Berkeley Early Music Festival in California. Closer to home, in Pennsylvania, he has several concerts with Philadelphia Choral Arts, Night Music, and the Bucks County Choral Society. He is a member of Kuwento Mizik, a classical crossover piano vocal duo. The duo won Best Performance of a Folk Song at the 2021 Canto Latino International Song Competition. They have performed their stories and music at venues all over the country including the Detroit Institute of Art and The Metropolitan Museum of Art. This season, they are releasing their first album “Lua Nova”, a program of mostly original arrangements of folk and popular ballads from Brazil, Haiti, the Philippines, Iran, India, and the United States. As a researcher, Cerin is interested in Haitian classical music and music of the African diaspora. He launched the Lisette Project in 2021, which is a digital humanities initiative focused on early Haitian classical music beginning with the oldest song in Haitian Creole, "Lisette quitté la plaine." He is producing a documentary about the song premiering in spring 2022. Jean Bernard recently joined the African Diaspora Music Project as an Assistant Editor and is co-writing a chapter on Haitian classical music performance in the forthcoming Oxford Handbook of Arrangement Studies. Jean-Bernard serves as an assistant professor at Lincoln University in southern Pennsylvania and will be joining the faculties of the Collaborative Piano Institute in Baton Rouge and the Chamber Music Collective in Berkeley, California, next summer. He completed his doctorate at the University of Michigan, holds a Master of Music from the New England Conservatory in Boston, and a Bachelor of Arts from St. Joseph’s University in Philadelphia.

Haitian-American soprano Melissa Joseph is a previous Encouragement Award Winner in the 2021 Eastern Region Metropolitan Opera National Council Auditions. Ms. Joseph graduated from Georgia State University with both a Bachelor and Master of Music in Vocal Performance. Roles include Donna Anna (Don Giovanni), Micaëla (Carmen), and Pamina (Die Zauberflöte). Her most recent onstage work includes singing the role of Musetta (La Bohème) with Peach State Opera. Her collegiate work also includes Peep-Bo (The Mikado) and Sandman (Hansel and Gretel). In 2018, Melissa moved her talents to Boston, MA to study with Sharon Daniels, and has since debuted with White Snakes Projects, Mass Opera (formerly MetroWest opera), New England Conservatory Summer Opera Workshop, and New England Opera Intensive. With the virtual transition of various programs and competition, Melissa has remained an active performer and competitor. Ms. Joseph was featured in several international virtual recitals, the most notable being one curated by Angel Blue highlighting young artists around the world. She was also selected to perform in the Fort Worth Opera masterclass series and sang for Jennifer Rowley and Martina Arroyo. Ms. Joseph has also won many awards including a District Metropolitan Award in North Carolina (2022), third place winner in SAS Performing Arts Competition, Soprano and Contemporary Art Song Prize in the George Shirley Vocal Competition, and semi-finalist in the 2021 Annapolis Opera competition. Additionally, Ms. Joseph competed in the Tri-Cities Opera virtual competition and was awarded a Resident Artist position for the 2021-2022 season where she sang Sally in Stone Soup by John Illick.