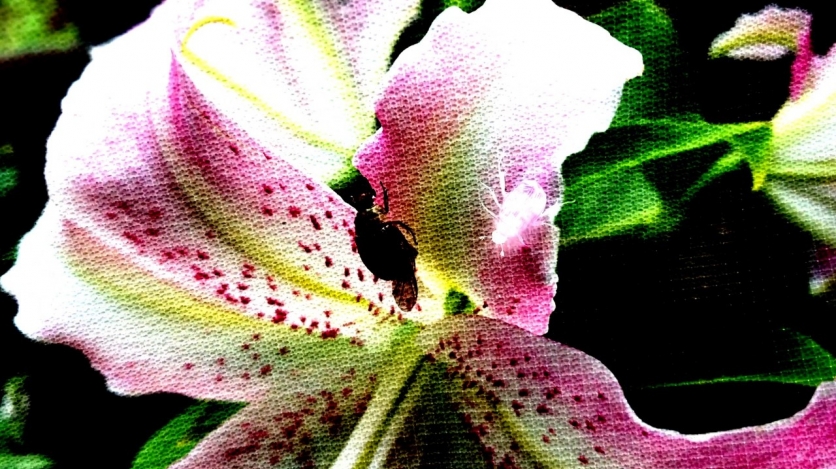 The ensemble makes its Music of the Americas debut with three audiovisual pieces by composers from Mexico and Costa Rica.

In Marisol Jimenez’s Caro Cibus, her own video is an allegory inspired by the tradition of Corpus Christi. In Mauricio Pauly’s Dust Unsettled, the video (created by Chicago-based artist Zach Moore) is detached from the musical content, while in Pablo Chin’s Green Alter Egos, the video, made by the composer, creates a miniature operatic world enacted by insects in their natural habitats.

The Fonema Consort was co-founded by Chin with singer Nina Dante and composer Edward Hamel in 2011. The group, having their Music of the Americas debut, is known for their “enthusiastic embrace of daring new music” (Chicago Reader) and is driven by a fascination with pieces that foster rich interplay of voices and instruments. The ensemble is committed to presenting works by Latin American composers to US audiences and encouraging musical exchange between these regions.

Recent compositions by Pablo Chin draw inspiration from the narratives of film and literature, phonetic structures in text, and the use of idiosyncratic transcription and conversion methods that enable imaginative exploration of pre-existent musics. His works have been performed in the Americas, Israel, Hong Kong, and Europe by artists like Ensemble Recherche, International Contemporary Ensemble, Ensemble Dal Niente, and others. A Costa Rican native, he earned a DMA in composition at Northwestern University. Chin is co-founder and artistic director of the Fonema Consort and currently teaches at Montclair State University in New Jersey.

Marisol Jiménez is a composer, performer and multi-disciplinary artist from Guadalajara, currently residing in Berlin. Her work expresses an intense fascination with the tactile process of creating sound, an interplay of the entropic within the structured musical machinery, colliding the primeval with the technological to seek forceful sensuous and visceral energies. Her output includes numerous chamber and electronic works, as well as sound and intermedia installations. Most of her works involve self-made sound sculptures, found objects, and collected sound materials from her own field recordings, improvisations, and performances. She holds a doctorate in composition from Stanford University in 2011, and a Masters from Mills College. Recently, she developed a project entitled SENSUOUS MATTER, a large scale performative installation for intervened autonomous machines and performers, which was selected for an inm-Funding grant for 2018 in Berlin. Jimenéz was a winner of the 39th Irino International Composition prize in Tokyo and has recently been a member of the National System of Art Creators in Mexico from the national Found for the Arts and Culture (FONCA). Her work has been performed and commissioned by leading ensembles and interpreters in Europe, the US, Japan, Brazil, and Mexico.

Mauricio Pauly's practice combines composition for hybrid instrumental/electronic ensembles, sound design, and live performance. As an active cross-disciplinary collaborator, his work includes numerous projects with writers, designers, programmers and theatre-makers. His music has been featured by festivals that include Ultima Festival (Norway, 2011), Warsaw Autumn (Poland, 2013), Darmstadt International Summer Courses (Germany, various years 2010–16), Le Bruit de la Musique (France, 2014), Images Sonores Festival (Belgium, 2015), Bludenzer Tage zeitgemäßer Musik (Austria, 2016) and Open Ears Festival (Canada 2018). Pauly was a fellow at Civitella Ranieri (Umbria, Italy) and the Ratcliffe Institute for Advenced Study in Cambridge (MA). In 2017 he was Composer-in-Residence at Villa Romana (Florence) undertaking a two-part creation and performance residency. Pauly is a founding member of UK-based ensemble Distractfold. He is currently Assistant Professor at SFU's School for the Contemporary Arts in Vancouver, having previously taught at Royal Northern College of Music in Manchester, and at the Architectural Association School of Architecture in London. He has given workshops and masterclasses at McGill University, New York University, Brussels Royal Conservatory, Bath Spa University, and Huddersfield University, among others. Born in Costa Rica, he currently lives in Vancouver.

The MetLife Foundation Music of the Americas concert series is made possible by the generous support of Presenting Sponsor MetLife Foundation. The Fall 2020 Music program is also supported, in part, by public funds from the New York City Department of Cultural Affairs in partnership with the City Council. Additional support for this concert comes from The Amphion Foundation, Inc. and the Aaron Copland Fund for Music.