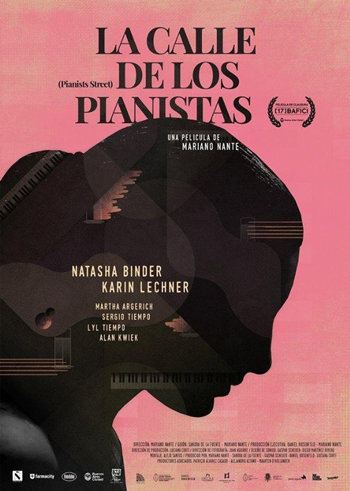 This event is now at capacity. Please email Martha Cargo at mcargo@as-coa.org to be placed on the waitlist.

Admission: FREE and open to the public. Pre-registration required.

Not yet a member? Learn how to become an AS member or a YPA member.

Music of the Americas presents a screening of the documentary La calle de los pianistas, which focuses on a small street in Belgium on which Martha Argerich and a family of four generations of concert pianists live. At the emotional crux of the film are mother-daughter pianists Karin Lechner and Natasha Binder. This film is the feature-length debut of young Argentine director Mariano Nante. The evening will be hosted by Cinema Tropical's Carlos Gutiérrez. Run time of the film is 1 hour 30 minutes.

The journalist Sandra de la Fuente first told Nante about the street, known as "La calle de los pianistas," and later became a screenwriter of the film, which had its debut to wide public acclaim this past spring at the closing night of the Festival de Cine Independiente in Buenos Aires (BAFICI). The balance between family and professional practice is carefully outlined throughout, and Nante's lens into this unique microcosm is both intimate and revelatory.

Karin Lechner (b. Buenos Aires) spent most of her youth in Caracas, Venezuela, where she began her musical studies with her mother, Lyl Tiempo. She made her first public appearance at the age of five, and her debut with orchestra when she was 11. She moved to Europe and continued her piano studies with Maria Curcio and Pierre Sancan and also received training from Martha Argerich, Nelson Freire, Daniel Barenboim, Nikita Magaloff, and Rafael Orozco. At age 13, Karin Lechner performed in Washington, DC and appeared at the opening concert of the Holland Festival with the Amsterdam Philharmonic (Concertgebouw). She has since undertaken an active international career, performing throughout Europe with frequent appearances in the United States, Latin America, and Japan. Lechner has performed in major concert halls all over the world, including the Kennedy Center (Washington, DC), Concertgebouw (Amsterdam), Philharmonie (Berlin), Suntory Hall (Tokyo), and Teatro Colón (Buenos Aires). She has participated in festivals at Menton, Toulouse, Montpellier, Colorado, Verbier, Lugano, and Schlesswig-Holstein. Lechner frequently collaborates with other distinguished artists in chamber music performances, such as Argerich, Janos Starker, Barbara Hendricks, and Viktoria Mullova; she regularly performs two-piano music with her brother, Sergio Tiempo, with whom she forms a permanent duo and has recorded several CDs. She has recently played recitals with Mischa Maisky in Spain and Germany, as well as the Salzburg Festival. Lechner made her first record at age 13 featuring works by Bach, Schumann and Chopin (EMI); at 15 she recorded the Beethoven first piano concerto and Mozart K. 467 (CBS). She subsequently recorded Mozart piano concertos K. 413, 414, and 415 with the Franciscan Quartet, and recorded two albums of Brahms piano concerti with the Berlin Philharmonic.

Natasha Binder (b. 2000) had her concerto debut at age 10 in London with Mozart's K. 467, swiftly followed by Beethoven's Piano Concerto no. 1 at Teatro Colón, for which she received two standing ovations. She has since performed the Ravel and Liszt concerti at the Palais des Beaux-Arts (Brussels), and participated several times in the Festival di Pietrasanta (Italy), organized by Michael Guttman.

Carlos A. Gutiérrez is a film/video programmer, cultural promoter and arts consultant based in New York City. As a guest curator, he has presented several film/video series at different cultural institutions, including the Museum of Modern Art, the Solomon R. Guggenheim Museum, BAMcinématek, Yerba Buena Center for the Arts (San Francisco, CA) and Museo Rufino Tamayo (Mexico City). Along with Mahen Bonetti, he curated the 53rd edition of the Robert Flaherty Film Seminar. He is a contributing editor to BOMB magazine and has served as a member of the jury and the selection committees for various film festivals including the Morelia Film Festival, SANFIC - Santiago Film Festival, The Hamptons International Film Festival, The Asian American International Film Festival and New Fest: The New York Lesbian and Gay Film Festival, among others. He has served as both expert nominator and panelist for the Rockefeller Fellowship Program for Mexican Film & Media Arts and for The Rolex Mentor and Protégé Arts Initiative, as well as a screening panelist for the Oscars' Academy Awards for film students. He holds MA in Cinema Studies from New York University and a BA in Communications from Universidad Iberoamericana (Mexico City).