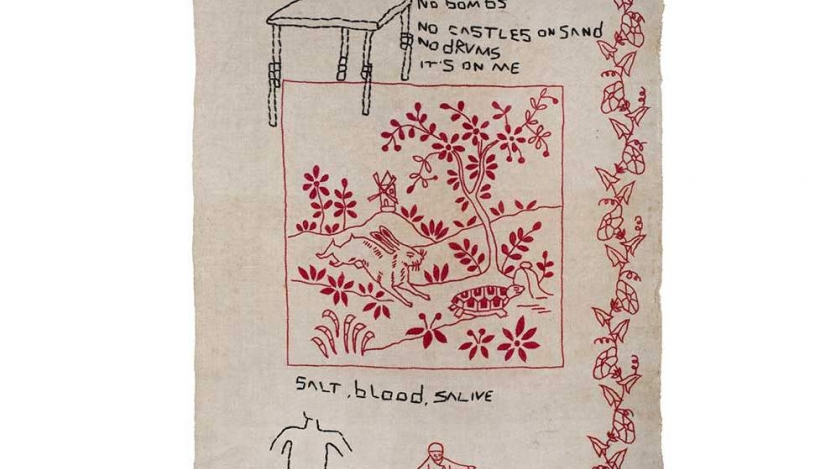 Americas Society invites you to the first U.S. solo exhibition of this key Brazilian artist.

This event is free and open to the public but registration is required.

Americas Society invites you to the exhibition opening of José Leonilson: Empty Man. José Leonilson (1957-1993) came of age as an artist during the 80s generation in Brazil. What he shared with this diverse artistic milieu was the so called ‘joy of painting,’ rediscovered in the years following the end of Brazil’s dictatorship. What separated him from his contemporaries was his personal way of working and his distinct aesthetic centered on raw emotional feelings, introspective musings, and private affairs.

This Fall, Americas Society will present José Leonilson: Empty Man, the first U.S. solo exhibition of this key Brazilian artist. Focusing on Leonilson’s production as a mature artist, the show will feature approximately 50 paintings, drawings, and intimate embroideries made between the mid-1980s until 1993, when the artist died of AIDS. This short, yet prolific, period showcases the artist’s fully developed language, connecting Leonilson’s oeuvre with contemporary art practices, Brazilian vernacular traditions, and global issues prompted by the AIDS crisis. By taking as its starting point the works produced during the last three years of his life and moving backwards into the 1980s, the exhibition maps Leonilson’s artistic journey following the reverse chronology of T.S. Eliot: “In the beginning is my end. In my end is my beginning.”

Edited by Karen Marta and Gabriela Rangel, a fully illustrated publication with newly commissioned texts is being produced in conjunction with the exhibition. The book, designed by Garrick Gott, will feature essays by the show’s curators, as well as texts by invited scholars Jenni Sorkin (University of California at Santa Barbara), Luis Enrique Pérez Oramas (writer and art historian), and Yuji Kawasima (Universidad Complutense in Madrid). It will also include a republication of Brazilian curator Lisette Lagnado’s interview with the artist, first published in the 1995 book São Tantas as Verdades (So Many are the Truths).